When the International Women’s Day went by this week, it was time to reconsider the portrayal of women in Tamil cinema over time.

Recently I saw a meme showing a bunch of young girls commenting on the archival poster of a film with the title Kanavanae Kankanda Dheivam (Husband alone is the visible god). The girls say, “How funny the title is!” Sixty five years ago, the Gemini Ganesan-starrer with this name drew a chorus of wows from film-goers.

Times have changed and people’s notions have changed. But Tamil cinema seems caught in a time warp. We now have heroines as famous as heroes but no Tamil heroine can yet outlive or outshine the heroes. Women continue to age quicker on screen although men don’t seem to age at all.

Pandaribhai, who played Sivaji Ganesan’s love interest in Parasakthi in 1952, acted as his mother 15 years later in Deivamagan. Anjali Devi was MGR’s pair in Sarvathikari as well as Chakravarthy Thirumagal. Twenty three years later, she was his sister-in-law and mother figure in Urimaikural. Sujatha, who was the ill-treated wife of Rajinikanth in Avargal (1977), played his mother in Maaveran (1985) and Baba (2002) and so on. Meena who played Rajinikanth’s foster niece, then heroine, is now senior to him on screen.

Men never become old or obsolete. Women are there only for the voyeuristic male gaze.

Anjali Devi was MGR’s pair in Sarvathikari as well as Chakravarthy Thirumagal. Twenty three years later, she was his sister-in-law and mother figure in Urimaikural

The mother’s and the sister’s only job is to shower affections on the protagonist who is always at their disposal to save them in distress; this template targets the womenfolk and wins their love for the hero. The hero’s lady-love, with her doe-eyed, sensual and sensuous frame is there for the illusory world of privacy each viewer stays in,  if for a fleeting time, in the dark auditorium.

Love poems in Sangam literature show the heroine as fixated on the valorous and chivalrous hero, pining for his love and union with him. The poems are eloquently lyrical about the lady-lover’s amazing anatomy.  Film lyricists seemed to carry off where the Sangam poets left off thousands of years ago, erotically delineating the heroine’s charms to the great pleasure of the voyeurs. 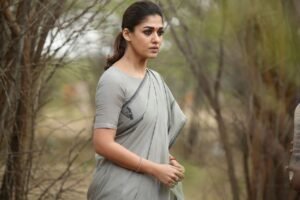 That Nayanthara, hailed as Lady Superstar, is still holding her own in Tamil cinema for over 20 years is heartwarming for many.
Photo Credit : moviebuff.com

Old-timers, perhaps in their 80s or 90s now, still recall how the male audience floated on cloud nine when TR Rajakumari, dreamgirl of yesteryear,  threw an arrow of flowers at M K Thyagaraja Bhagavathar sitting comfortably on a couch, surrounded by a group of males and danced towards him while he was singing the song, Manmadhaleelaiyaiventraar  Undo? (Is there anyone who has overcome Cupid’s tricky deeds?). Those in their 60s will recall Silk Smitha with her intoxicating eyes dancing to seduce Kamal Haasan.

It is a great irony that even top heroes, who projected themselves as protectors of womanhood, ended up subjugating or subordinating women or putting them in place in Tamil cinema. If the heroine is arrogant on the count of education or status,  the immediate job  of the hero and  (of course, the script writer) is to push her to the point of utter helplessness so that  she  automatically turns to him for help (whether she likes or not, that doesn’t count). The audience, paradoxically including women, clapped their hands when the heroine in the denouement goes down on all fours before the hero in tears, seeking pardon.

In the famous Sivaji-starrer Pattikaada Pattanamaa (Village or Town?), the London-educated feminist and independently thinking heroine (Jayalalithaa) goes away from her husband. Not to be spurned, he keeps wooing her until he stages his own wedding to another woman in the last scene. That’s when the heroine rushes back to her husband.

This method of teaching a lesson to the high-headed heroine was followed by Vijayakanth in the film En Purushanthan Enakku Mattumthaan (1989) and K Bhagyaraj in Mouna Geethangal (1981).

There’s no gainsaying that MGR was admired by women to the point of being deified. But, unfortunately, several anti-woman tropes are employed in his films too. Male fans loved it and even the women in the audience approved it. In Gulebhagavali (1955), when the queen (G. Varalakshmi) of an all-women kingdom was throwing question after question at MGR, she came across as a woman of strong intellect. One of her thought-provoking question was: “Is a male or a female suitable for ruling a country?” MGR, who looked a tad inferior in the royal court, wisely gave an answer that would touch the chords of women’s hearts: “There is no gender discrimination when it comes to ruling.” But in a subsequent scene, this rational pro-woman situation turned topsy-turvy with the heroine shown as singing a song that wanted the evening to end soon and the night with the hero to come soon. She apparently had fallen for MGR.

Women fell for MGR. He rarely pined for them.

“In summer, I can remove my shirt openly. What about you?” Kamal told the tech-savy heroine Lizzy in Vikram. In several of his films, Rajini pontificated on the attributes of the ideal woman: a neatly worn saree, cascading tresses of raven-like hair bundled up into a decent knot, and eyes hung low. These were not very different from MGR’s ideas on how a woman should be and why should not laugh openly.

In Arangettram and Aval Oru Thodarkathai, Balachander broke new ground. Yet he too had Kamal tame the shrewish Sumitra in Nizhal Nijamakirathu

Directors Sridhar, K Balachander, K Mahendran and R C Sakthi tried to reverse this trend. In  Sridhar’s Kalyana Parisu, the heroine makes her own choice. In Arangettram and Aval Oru Thodarkathai, Balachander broke new ground. Yet he too had Kamal tame the shrewish Sumitra in Nizhal Nijamakirathu. He had Kamal, or rather SPB, sing that the woman’s anger should stay with the kitchen. And if an conquering hero came to rule, it was only right that she should cow down.

Today women-oriented films such as “Aram” (2017), ‘Aadai’ (2019) come out now and then.  That Nayanthara, hailed as Lady Superstar, is still holding her own in Tamil cinema for some 17 years is heartwarming for many. The heroes though are strongly holding the baton they received to pass on to the next generation.