Moringa, hibiscus, blue pea flower, which of these edible blossoms would you cook?

As I walked through the paths of my village to my friend’s house, I used to jump up and pluck tamarind and its flowers from the tree branches above to eat them on my stroll. These tamarind flowers and buds had a medley of flavors—mild sourness, sweetness and sharpness. Like the tamarind blossoms, very few flowers are edible in nature in its raw form.

Edible flowers have good therapeutic properties and have been in use for a long time as home remedies for certain ailments. Colorful flowers are used in the production of dyes and food colorants, whereas some types of flowers are dried, powdered and stored for use in cooking, and others are just used as fodder. The aroma of flowers varies from bitter to sweet, and likewise the flavor of the nectar extracted from them by bees also varies. Some people use flowers from their gardens for their medicinal properties or just cook and consume them as their parents or grandparents did, without really knowing their attributes. Let’s look at some edible flowers and what makes them valuable in cooking. Tamarind flowers and buds have a medley of flavors—mild sourness, sweetness and sharpness. (Wikimedia Commons – Vijayanrajapuram)

Moringa flowers or drumstick flowers are cooked as poriyal or added to scrambled egg. They are also used in the preparation of vada, just like banana flowers. Scientific studies show that regular consumption of moringa flowers exhibited anti-tumor activity in mice. In Ayurveda, moringa flowers are used in improving reproductive health and strengthening the nervous system. The flowers are dried to make an infusion. Dried moringa flowers, which have been traditionally used in south Indian cooking, are now available online, making them costlier. Nutritionally the moringa flowers are rich in protein, fibre and minerals.

Traditionally neem flowers are used for the preparation of a multi-flavored variety of pachadi wherein it contributes the bitter component of the dish which incorporates all flavors. It is a dish that is consumed to mark the onset of a new year. Neem flowers are also used in making rasam. They have been proven scientifically to prevent cancer in a study on young animals. The mashed extract of neem flower is mixed with honey to treat infestation in children.

The flowers of Pongamia pinatta (Milletta pinatta) have good therapeutic properties as well. These flowers have anti-viral, anti-oxidant properties. They also aid in healing digestive disorders. The dried flowers are used in the preparation of tea along with fenugreek, turmeric and pepper to reduce blood sugar levels. In Ayurveda, the dried flower infusion also has the ability to heal piles. The dried flower powder is also taken along with honey to treat cold and cough. Non-edible oil is also extracted from flowers which is used for treating skin diseases.

The red hibiscus is a flower known for its medicinal use. The color of the flower is due to the presence of the pigment anthocyanin. This anthocyanin is known for its anti-oxidant properties. Researchers have also identified a lot of phytochemicals in the edible flower. This nutritionally packed flower is used as hair tonic and also consumed as tea/infusion.

The infusion gives a bright beautiful color as the anthocyanin leaches from the flower into the water. Dried hibiscus flowers are powdered and added to tea dust for regular tea preparation. Hibiscus tea has been one of the traditional home remedies against urinary tract infection. It is known to be a good anti-bacterial agent. Fresh flowers are also consumed by many people. The flowers also possess anti-bacterial, anti-diabetic and has a protective effect on the liver.

Those who are taking antidiabetic medication should avoid hibiscus as it lowers blood sugar levels, and will lead to complications. Hibiscus tea also lowers blood pressure and hence should not be taken by those on BP medication.

The edible flowers aid in lowering deposition of fat in the liver and similarly lowers blood cholesterol, thereby clearing clogs in blood vessels and guarding against atherosclerosis. Those who are taking antidiabetic medication should avoid hibiscus as it lowers blood sugar levels, and will lead to complications. Hibiscus tea also lowers blood pressure and hence should not be taken by those on BP medication. Pregnant women are not advised to take hibiscus tea/infusion as it has the potential to cause bleeding.

A common climber found in most houses in Tamil Nadu is the blue (butterfly) pea flower (Clitoria ternatea) known as “sangu poo”. This edible flower has an attractive blue color and so does an infusion/tea made with it, making it appealing to drink. It is also used as a food colorant. In blue pea flower the deep colour is due to the presence of the anthocyanin Delphinidin. Teratin anthocyanin, quercitin and kaemferol present in the flower exhibits anti- oxidant, anti-pyretic (brings down fever), anti-inflammatory and also has fat burning properties. Blue pea flower infusions are consumed as well as applied as a hair tonic. 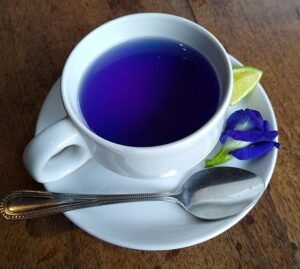 The blue pea flower is anti-oxidant, anti-pyretic (brings down fever), anti-inflammatory and also has fat burning properties. Blue pea flower infusions are consumed as well as applied as a hair tonic.

Interestingly, the blue pea flower’s anti-pyertic effect is similar to that of paracetamol. The flower also helps improve cognitive function and brain activity.

These flowers are consumed in raw, dried or powdered form. Although the consumption of these edible flowers is not new to Tamilians, their usage has been limited in recent times as drugs are easily available at pharmacies. But they are part of our rich traditional knowledge. Hence, the elderly at home who are knowledgeable about the safe use of these flowers are encouraged to pass on the information and the practice to the younger generation.