Budget for tribal development should be proportional to Adivasi population, says expert

The Union Budget’s cuts in food subsidies and MNREGA allocations will hit Adivasi communities the worst, a tribal advocacy group has said. “Tribal communities have the highest numbers of those malnourished, particularly children and women. Cuts in food subsidies will be disastrous and lead to direct intensification of hunger,” the Adivasi Adhikar Rashtriya Manch said in a press statement on Friday.

The group also pointed out that 20% of those employed in the Mahatma Gandhi Rural Employment Guarantee Act are from tribal communities, and therefore they will be the worst affected by the massive cut of 25 per cent in MGNREGA allocation for 2022-2023. Successive governments have done little to better the lot of the Adivasi people, most of whom have been left out of the developments the rest of the country has made. Despite various schemes by governments over the past few decades intended to help the Adivasi people, implementation is often flawed and blind to the realities of tribal life.

In this context, Inmathi speaks to Dr K Krishnan, who has been working for the development of tribal people for 32 years.

K Krishnan is the Chief Executive Officer of the Foundation for Sustainable Development (FSD) and the convener of National Adivasi Solidarity Council. He has been instrumental in rescuing over 13,000 tribal people who have been working as bonded laborers and is also involved in projects for their rehabilitation. He has undertaken various developmental projects for the welfare of tribal people and some of the projects have produced good results.

How many tribes are there in South India?

The tribal people live on the fringes of society. Not just in Tamil Nadu, it is the same in the six states, mostly in South India, where I have been working for their rights and their development. There are 163 tribal groups with distinctive identities in these six southern states. Among them 25 are identified as ancient tribes. In Tamil Nadu, the Irular, Thodar, Kurumbar, Kothar, Kattu Naicker and Paniar tribes fall in the list of ancient tribes. They are among the endangered tribes as well.

Post-independence, many projects were drawn up for the development of Adivasi people. How have these projects helped? Have they helped tribal people achieve significant socio-economic growth in the last seven decades?

We need to consider several major factors while drawing up developmental projects for tribal people. For ages, the Adivasis have been living a self-sustaining lifestyle, depending on the forests. The concept of a sustainable lifestyle that the world speaks about today has been the lifestyle of the tribal people from the beginning.

Till the 1990s, 90% of the district’s population were tribal people. And the belonged to them. At present, the tribal population has fallen to just 20%, reducing them to minorities. They don’t possess much land anymore either. So, the question arises, how did this happen? Who owns the lands in the district now? The situation is the same across Tamil Nadu.

Let us take the example of the Nilgiris district. Till the 1990s, 90% of the district’s population were tribal people. And the belonged to them. At present, the tribal population has fallen to just 20%, reducing them to minorities. They don’t possess much land anymore either. So, the question arises, how did this happen? Who owns the lands in the district now? The situation is the same across Tamil Nadu.

Are you talking about land rights?

It is not just about land rights but the basic right to life. The forests are their habitat and their lives are based on that. But forests have been indiscriminately destroyed. When forests are destroyed, the tribal people’s right to life is destroyed. They are not left with the right to decide where and how they must live. 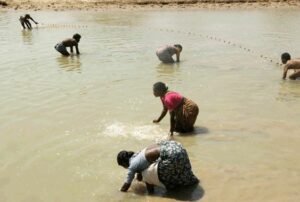 So, what is the status of the tribal welfare and development projects?

There is something called Integrated Adivasi Development Scheme. There are also five-year plans. But the bureaucrats who execute these projects do on the basis of statistics that they have in hand. Even before the projects are completed, the officials drop them stating that they are not good enough. The projects are given a spin all of a sudden. The project timing is altered. So, this is what has been happening in the name of development projects. The tribal people don’t benefit, and the funds sanctioned for the projects are sent back without executing any works.

Do you mean the projects don’t help at all?

They all fail at the execution level. Meanwhile, the habitat and lands of the Adivasi people all are snatched away. Nothing is done for the rehabilitation of these people. Nobody talks about it either. Only when a major calamity strikes or controversy happens does the popular media and the public start speaking about the plight of tribal people. The discourse happens for a short while and then it disappears.

What is the budgetary allocation like for tribal development?

Funds allocation should happen based on the ratio of Tribal people in the population. At a state level, 27 projects have to be executed for tribal development and the fund allocation happens accordingly. The Union Budget should ideally set aside 8% of funds, while the state government should set aside 1% of the Budget. Out of this budget allocation, just 40% funds are used for the intended purpose of tribal development, whereas 60% of funds are diverted. In most of the projects, the funds are not utilized at all, and are returned to the government. How would this help the development of the Adivasi people?

Covid-19 has disrupted their schooling because classes moved online and the tribal people don’t have the infrastructure to adapt to it. State government projects should consider these factors. For instance, there is a scheme called ‘Illam thedi kalvi’ (education at the doorstep). These people don’t even have ‘illams’ (houses), and the state government is planning to take education to their homes.

What do you think of the housing schemes for tribal people in Tamil Nadu?

The housing schemes are being executed for years together and they keep prolonging the deadline. Because the houses never get completed, the Adivasis live in degraded places or on the banks of water bodies. Nothing changes.

What is the situation with regard to education among the tribal children?

Covid-19 has disrupted their schooling because classes moved online and the tribal people don’t have the infrastructure to adapt to it. State government projects should consider these factors. For instance, there is a scheme called ‘Illam thedi kalvi’ (education at the doorstep). These people don’t even have ‘illams’ (houses), and the state government is planning to take education to their homes. A new approach is required for the education and empowerment of Adivasi people.

What in your point of view are the ways and means for tribal development?

Development projects are drawn at the state and national level. Such projects won’t benefit the tribal people in any real sense. The projects should be broken down at the micro level based on the living conditions and lifestyle of the particular Adivasi tribes of each area.

Let me explain this by citing the opposition of the Tamil people to Hindi imposition. Similarly, we should realize that the culture and language of tribal people are different from those of the mainstream. They are minorities at every level. Therefore, when we discuss and execute any projects in our languages, it will appear like an imposition to them. They feel alienated from developmental projects that are meant for them. Only those projects that are designed in their own languages and take into consideration their culture and dignity will succeed. Popular projects and education may have helped a bit but we can’t expect those projects designed according to mainstream ideas to bring development among Adivasis.

Tribal people have rich knowledge about their habitat. We should first respect that knowledge. The knowledge comes from tradition, nature, their habitat and their occupations. Anyone designing developmental project for tribal people should take their traditional knowledge into account. Only then, such projects would turn into a tool of tribal development. Politicians and bureaucrats should remove their mental block or prejudices about tribal people. They should have an open mind to understand tribal people in the first place.