Success tastes like karupatti peanut candy for this Virudhunagar engineer

Skill, relentless effort and helping hands can help ensure the success of a new venture. These have helped Stalin, a young man, start and run a successful small business. He makes snack foods like peanut candy out of palm jaggery – a traditional sweetener of Tamil Nadu produced from the sap of the palm tree.

Stalin was born in Kariyapatti village in Virudhunagar. Having studied engineering, he was working in the research and development division of a prominent company. Although, he earned a good income, Stalin felt dissatisfied. There was a void in his life that he couldn’t quite explain. He then began a search for answers.

Stalin wandered around. He lived for a few days at Cuckoo Kattupalli at the foothills of Javadhu Hills where he met other young people who had new ideas about how best to observe traditions.

Stalin started reading about alternative lifestyles, the village economy and so on. The works of Gandhian economist JC Kumarappa made a deep impact on him. They showed him a way.

Sivaraj, who started the Cuckoo Kattupalli Forest School, sowed a seed in Staling about traditional knowledge. That seed grew into peanut candy made out of palm jaggery. He established motherway.in inspired by the taste of tradition.

Previous generations considered palm jaggery a wholesome food. But we have forgotten that. I wanted to help re-establish continuity with a tradition.

Here’s an interview he gave to inmathi.com

How did you become interested in starting a palm-jaggery-based food business?

Neither I nor anyone in my family knew anything about making food items from palm jaggery. I studied engineering and was working in a big company, but I wasn’t satisfied with what I was doing. So, I started searching for alternatives. Sivaraj of Cuckoo Forest School helped me find the way.

What kind of prep work did you do before starting your venture?

Kumarappa’s works on a self-reliant economy inspired me start on my journey and growth. When the idea of palm jaggery took root in my mind, I started researching about ventures that used palm jaggery. I visited the units that made them. They used machines but also depended on human labour. I wanted to start a venture that would foreground human resources. I learned from undertakings that had similar ideas. A friend taught me some skills too.

To make peanut candy, the ingredients required are groundnuts and palm jaggery. Karupatti (as palm jaggery is known in Tamil) has a special place in Tamil cuisine; it is equated with the taste of tradition. Previous generations considered palm jaggery a wholesome food. But we have forgotten that. I wanted to help re-establish continuity with a tradition. How many years did it take to establish the business? Have you reached your goals?

It’s been seven years. In the first four years, I focused on quality and ensuring the traditional taste of my product. Then I started putting efforts towards creating new tastes using new ingredients – but all based on palm jaggery.

What are these new ingredients? 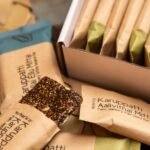 The flaxseed bars and Chia seed bars are modern take on the traditional sesame seed (ellu) candy. They are a hit among VIPs and celebrities.

We have added flax seeds and chia seeds in palm jaggery to create new sweets, for instance. They have been received well. Many VIPs and celebrities have come to know about these sweets. They have become our customers.

Today we have two units. Depending on market demand, we collaborate with other organizations who have similar quality levels. This has helped us cater to our customers without delaying orders or compromising on quality. Some 13 of us are working in our units. This includes me and four other members of my family.

What future do you see for such an endeavor?

Places where raw materials are available should also have cottage industries that make products out of the raw materials. We have been able to do that. This is giving me much satisfaction.

We have added flax seeds and chia seeds in palm jaggery to create new sweets. Many VIPs and celebrities have come to know about these sweets. They have become our customers.

Government support for such unique ventures that provide traditional food items is not available. That should change. There should be schemes to support young people who want to start such ventures. Only then will village industries grow and shine.

You can buy Stalin’s products from www.motherway.in