Vishal Venkat’s Sila Nerangalil Sila Manithargal is to be released on the big screen on January 28. The film’s title, lifted from the late renowned author Jayakanthan’s novel, led to a controversy a month ago.

The music release of the movie starring Ashok Selvan, Nasser, K S Ravikumar and Banupriya, was held on December 13 last year. And that’s where the issue began. Kamal Haasan, addressing the crowd, recalled that the title of the film was that of Jayakanthan’s novel but went on to express the presumption that had the author been alive, he would not object to using it.

On the contrary, Jayakanthan’s children Kathambari, Jayasimhan and Deepalakshmi did indeed object. They wrote a letter to Kamal Haasan expressing their dismay that they were not consulted over the copyright and importance of the title. They also pointed out the opposition expressed by Jayakanthan’s fans on social media when the movie was announced.

However, the movie makers seem completely deaf to these objections and are going ahead with the release of the film with the same title.

Kamal Haasan has in the past used Jayakanthan’s titles himself. He named his 2009 movie Unnai Pol Oruvan despite Jayakanthan himself having directed a movie of the title in 1965.

Such instances are not new, particularly where Kamal Haasan has been involved. Years ago, when he named his Madurai-based movie Sandiyar, he faced heavy criticism that it was glorifying the roguish behavior of a certain caste. Kamal then had to change it to Virumandi. But years later another movie titled ‘Varar Sandiyar’ was released like a breeze. No one seemed to care.

Another time, Kamal’s movie Viswaroobam came in for criticism too, as it was the name of an old movie starring Sivaji Ganesan. 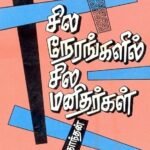 Similarly, Kamal has in the past used Jayakanthan’s titles himself. He named his 2009 movie Unnai Pol Oruvan despite Jayakanthan himself having directed a movie of the title in 1965. When Kamal used the title, he is said to have obtained the consent of Jayakanthan. However, the issue with the latest title ‘Sila Nerangalil Sila Manithargal’ is that the filmmakers did not bother to keep the family informed and Kamal Haasan’s words seemed to have given legitimacy to their actions.

Jayakanthan’s books and their titles have been in vogue among Tamil film makers for long. K Bagyaraj directed Sundarakandam when Jayakanthan had already written a book of that name. That title was so much in demand that talk was rife that Kamal Haasan too had named his movie Sundarakandam, but changed it Soorasamharam—allegedly because he found the title not catchy enough. Unfortunately for Kamal, Bagyaraj’s Sundarakandam became a box office hit whereas Soorasamharam did not make magic as expected. 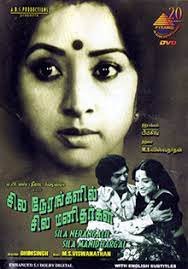 Jayakanthan’s novel Sila Nerangalil Sila Manithargal was made into a movie in 1977. Actress Lakshmi made a name for herself playing the role of Ganga in it.

Talking about Sila Nerangalil Sila Manithargal, the Jayakanthan novel was itself made into a movie in 1977. Actress Lakshmi made a name for herself playing the role of Ganga in it. The novel, which was an extension of Jayakanthan’s short story Agnipravesam, bagged him a Sahitya Akademi award.

Protecting a title under the Copyright act is a difficult task. It’s understood to be more of a moral obligation. But the Tamil cinema industry doesn’t seem to care for such courtesies. Dhanush acted in a movie titled Uthamaputhiran in 2010, while Sivaji Ganesan’s 1958 movie of that name is still etched in the memory of Tamil cinema viewers. No one can forget Ganesan shaking a leg for the song Yaradi Nee Mohini. But even the 1958 movie was not the first of that title. P U Chinnappa had played a dual role in the 1940 movie Uthamaputhiran.

Dhanush also has a thing for the titles of his superstar father-in-law’s movies. Padikathavan, Pollathavan, Mappilai, Thangamagan—Dhanush has used all these Rajinikanth movie titles for his own films as well. Rajini’s Naan Magan Alla title was used again for Karthi’s movie. MGR’s Nadodi Mannan title was used for Sarath Kumar’s movie. In 1960, SS Vasan had produced Irumbuthirai with Sivaji Ganesan and Vaijayanthimala, which Vishal used as the title for his 2018 film.

When filmmakers decide to use the titles of novels or old movies, it would be common courtesy to seek the consent of the writers and producers who originally came up with them. Sadly, Tamil cinema cast away such virtue a long time ago. The industry has thought nothing of lifting entire stories of old movies without obtaining their copyright. While one has the option to seek legal remedy in such cases, enforcing copyright on titles is a different ball game altogether. Copyright rules are not watertight.

Dhanush also has a thing for the titles of his superstar father-in-law’s movies. Padikathavan, Pollathavan, Mappilai, Thangamagan—Dhanush has used all these Rajinikanth movie titles for his own films as well.

Title matters a lot in the cine industry. It should be catchy enough to grab attention. But it appears that movie makers are really struggling to get a good title, and are choosing the easy way of appropriating old movie titles. Authentic artists and filmmaker don’t normally indulge in these morally questionable practices. While many cinematic works by world-class filmmakers globally have indeed been inspired by the works of others, they have always acknowledged the original work and obtained the requisite permissions and copyrights. As for the Tamil film industry’s practise, it is aptly described by MGR’s famous number ‘Thirudanai parthu thirunthavittal thiruttai ozhikka mudiyathu’.