All through her life, Bangalore Nagarathnamal remained an ardent fan of Thyagaraja, one of Carnatic music’s trinity. A Devadasi, she was struck with despair when she saw that Thyagaraja’s grave was uncared for at Thiruvaiyaru. She sold her properties to construct the temple and memorial hall where the annual Thyagaraja music is today conducted. Many decades later, her own grave facing Thyagaraja is lying in neglect.

Thyagaraja (1767 – 1848) is an important figure in Carnatic music. The compositions of Thyagaraja who is also known as Thyagayya are sung by musicians extensively. For more than 110 years, the annual Thyagaraja aradhanai has been held at his resting place.

Bangalore Nagarathnammal (1878 – 1952) was Thyagaraja’s ardent fan. She visited his grave during the 1920s and found that the place was in neglect. She wanted to give the place a makeover. She sold her properties and mobilized funds for the project. A temple was constructed and the kumbabhishekam was held on Jan. 7, 1925. Nagarathnammal also raised a memorial hall for Thyagaraja near this temple.

Kings patronized Thyagaraja and musicians used his words to make a living. But it was a Devadasi who constructed a temple for him — V Sriram, historian and music enthusiast 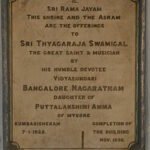 The plaque detailing the construction of the temple

the temple kumbabishekam happened on Jan. 7, 1925 and the building works were completed in 1938.

Nagarathnammal spent her last days in Thiruvaiyaru. She donated her remaining properties to the trust maintaining the temple and memorial hall. As per her last wish, Nagarathnammal was laid to rest opposite Thyagaraja’s grave. She had said that her resting place should be just in front of the saint she worshipped so she could see him for eternity.

Many years later, a holy man decided to put up a statue for Nagarathnammal. On her grave, a statue of Nagarathinammal in a bowing pose was erected. A small structure was also erected around the statue. But the structure is locked and remains neglected. Recently, writer Amarantha visited Thiruvaiyaru and expressed her dismay after visiting Thyaragaja’s temple. The elevation of the structure for Nagarathinammal is very low and it hardly fulfills her final wish of wanting to remain in Thyagaraja’s eyesight eternally. “The structure is locked and her statue is in total darkness. One has to really strain the eyes to look at her statue,” she said.

The 175th year of Thiruvaiyaru Thyagaraja Swamigal’s aradhanai is scheduled to happen on Jan. 22 and it is going to remain a low-key affair due to the Omicron scare. Carnatic music exponents will come together to sing the Pancharathna Keerthanais honouring the Carnatic music legend. A major attraction of Thiruvaiyaru every year, the aradhanai is a media event. The place goes into slumber after that.

Amarantha feels that it is not fair to abandon the architect of the place and the event. The statue has to be kept on a pedestal so that she remains on the line of sight of the Thyagaraja statue. “Nagarathnammal’s grave needs some attention too. The trustees should take note of it,” Amarantha said.

As per her last wish, Nagarathnammal was laid to rest opposite Thyagaraja’s grave

V Sriram has written a biography of Nagarathnammal titled The Devadasi and the Saint: The Life and Times of Bangalore Nagarathnamma. It’s worth mentioning that Sriram ended his book saying that kings patronized Thyagaraja and musicians used his words to make a living. But it was a Devadasi who constructed a temple for him.