For diaspora Hindu Tamils, Thaipoosam is bigger than Pongal

As far as Tamil Nadu is concerned, Pongal is the biggest festival of the year. Pongal is a secular festival and celebrates farming which forms the backbone of the population. It may well be that the exclusive focus given to Pongal by Dravidian parties in power has likely boosted the profile of Pongal.

Pongal is a major government holiday. The state government gives a handout at that time to all people through the ration shop and provides an allowance for government employees – encouraging the festive spirit. Abroad, such as in Malaysia, Singapore and Sri Lanka, however, Thaipoosam is the biggest festival for Tamils, especially for Hindus. It could be inferred that in the absence of the secularizing Dravidian movement, Thaipoosam, devoted to the principal Tamil deity, Murugan, dominates in those countries.

Dhanam, a second-generation Tamil living in Malaysia, says Pongal is not celebrated as much in Malaysia likely because Tamils there are not farmers. There is no holiday for Pongal in Malaysia. But Thaipoosam day is a government holiday. Thaipoosam is a much bigger festival here than Pongal, she adds. 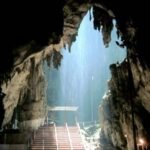 The belief is that the Devas (gods) who couldn’t vanquish the Asuras (demons) in war pleaded with Lord Shiva to help them. They asked that Shiva create a strong leader who would lead them to victory. Shiva then opened his third eye, and from the fire that emanated created six Murugan children. Raised by Karthigai women, the six children were made one when Parvathi embraced them.

Later when Murugan took the form of a renunciate, Parvathi gave him the spear of knowledge to overcome the Asuras. This day is celebrated as Thaipoosam. Murugan used this spear to defeat the Asuras. Poosam is one among the 27 stars in Tamil astrology. In the Tamil month of Thai, the day of poosam falls on the full moon day, which is the significance of Thaipoosam.

Thaipoosam at Batu Caves is probably among the most famous for the global Tamil community. Though celebrated in a big way in Palani, the Batu Caves Thaipoosam has become a famous event. The Thaipoosam festival at the Murugan Temple at Batu Caves attracts about a million worshippers and tourists. Even in India, the festival is not celebrated in such large a scale. (Photo credit http://murugan.org/temples/batumalai.htm)

In the beginning of the 19th century, Tamils who had gone to Malaysia to work in the plantations had a leader named Kayaroganam Pillai from Nagapattinam. Thanks to his efforts, a Mariamman temple was constructed in Kuala Lumpur in 1873. Apparently, Kayaroganam Pillai had a dream in which Mariamman came and asked him to construct a temple for her younger son, Murugan. Pillai installed a Murugan vel (spear), at the Batu Caves in 1888, some 12 kilometers away, and started worshipping there. A temple came up in 1891.

The way to the temple located some 400 feet above, up the mountain, was narrow and winding. In 1938, a proper passage with 272 steps was laid to reach the temple. A railway line was also laid to connect Batu Caves to KL.

The massive Murugan idol here is a big attraction. The 140-foot tall idol is positioned as if to welcome devotees into the temple. The work started in 2003 and was finished in 2006. The total cost of installing the idol was about INR 2.46 crore. Its surface glistens due to a special golden enamel brought from Thailand.

Dhanam, a second-generation Tamil living in Malaysia, says Thaipoosam is celebrated over three days. “The temple is only about a kilometer from my house. On the first day of Thaipoosam, the ther (chariot) from the Mariamman temple is brought from Kuala Lumpur to the temple. The Thaipoosam festival is usually a grand celebration. After the festival, the ther is taken back from here to the Mariamman temple in Kuala Lumpur early morning. People would come in a procession from KL to Batu Caves. They would pierce their cheeks with the spear like in any Murugan temple and carry the kavadi on their shoulders. Devotees would take a bath at the river below and go to the temple to worship. Since we live close to the Murugan temple, we would walk with the chariot through the night to Mariamman temple. Shops would line the streets and would be open for business all day and night. Free food would be available at stalls on the street. This year, however, because of Corona restrictions, the atmosphere is somewhat subdued,” says Dhanam who is 50 years old.

When Murugan took the form of a renunciate, Parvathi gave him the spear of knowledge to overcome the Asuras. This day is celebrated as Thaipoosam. Murugan used this spear to defeat the Asuras.

Dhanam says Pongal is not celebrated as much in Malaysia likely because Tamils there are not farmers. There is no holiday for Pongal in Malaysia. But Thaipoosam day is a government holiday. Thaipoosam is a much bigger festival here than Pongal, she adds. A flight of 272 steps leads up to the temple inside the Batu Caves.

In Penang state, at the Thanneermalai temple near George Town, Thaipoosam is celebrated in a grand manner. Not just Tamils, even the Chinese celebrate Thaipoosam here. The state government of Penang has declared Thaipoosam as a government holiday. The festival is also celebrated at the Subramaniar temple near Ipoh.

In Singapore, the moolavar is the Murugan spear at the temple. Here too the three day festival is a grand affair. People carry the kavadi, pierce their cheeks and go on a procession pulling a chariot. The Chinese take part in Thaipoosam here too.

In Sri Lanka, at the Yazhpanam temple, Thaipoosam is celebrated with all the usual rituals. Farmers go for the first harvest of their paddy crop that day and cook rice with it and eat it.