Why atheist Periyar is loved by the religious in Tamil Nadu

Those from outside Tamil Nadu or even young Tamils themselves might find it intriguing that an atheist like Periyar is one of the biggest icons of a devout Tamil populace. What led to this seeming paradox? How did this rational leader capture the imagination of a religious people?

Dravidar Kazhagam leader K Veeramani’s words answer this question in a nutshell. He once said, “Periyar is not only a revolutionary leader, he (his thinking) is synonymous with science, which dispels the darkness of ignorance.”

A freethinker, ‘Periyar’, as E V Ramasamy was respectfully called, never let social identities such as religion, language, gender, nation, caste or race shackle his thinking. The man had the indomitable will and courage to evaluate social orders without prejudice and to point out its fallacies and suggest remedies.

For a people who had long lived through the oppressive social hierarchy of caste, religion and gender, Periyar’s words opened up their minds, particularly to the concepts of social justice and self-respect.

Independent thinker at an early age

From a young age, Ramasamy, who was born in 1879 to a wealthy family in Erode, was an independent thinker. His family is said to have been so rich that they paid income tax of close to Rs 1 lakh as far back as the 1920s. They were so well-placed in society that they hosted members of the Travancore Royal family and other wealthy, aristocratic people often at their home. Yet, the young Periyar was not one to simply enjoy the comforts of his privileges, while he saw inequalities all around him. In fact, early on, he began questioning the apparent contradictions he saw in Hindu mythological texts. Periyar firmly believed that caste was a social evil that needed to be destroyed. And for this, religion which is at the root of caste, had to be cut away. Periyar thus questioned the theory of the existence of gods and did his best to inculcate rational thinking in people.

“If a god created an unequal society and made millions suffer in the name of religion and caste, the very purpose of being a god is lost,” Periyar said. His atheism stemmed from this logical reasoning. He also observed that human beings evolved as a strong species chiefly because of our ability to use our brains effectively.

Importance of self respect and wisdom

He believed that wisdom and self respect were the primary factors that distinguished a person. And he plunged into working for society to make people realise this fundamental truth. His journey was long and arduous but the work of this prolific writer and speaker served to change the psyche of the Tamil people. Those who hitherto accepted all sorts of indignities began realising the importance of self respect.

All through his life of 95 years, Periyar relentlessly fought for these ideals. He had learnt from his personal experiences why inequality prevailed in society. Inequality in India did not arise out of economic disparity as commonly believed; caste played a crucial role in it. People were and continue to be discriminated based on their caste.

Unlike other reformers of that time, Periyar was not ready to accept cosmetic remedies and worked for the annihilation of caste, like BR Ambedkar.

Besides, a look at Periyar’s works would reveal what a farsighted individual he was and how he predicted the progress of humankind several decades ago.

Reservations facilitated education for all

Let’s look at a few examples. We are aware of the fact that education was a distant dream for the vast majority of people in Tamil Nadu at the beginning of the last century. In 1924, when various parts of the country were gearing up for the nation’s Independence under the leadership of Gandhi, Periyar was preparing for social independence. He pressed for a resolution at the annual state congress conferences to pressurize the ruling regime to implement a government order for fair representation of communities in educational institutions for the pursuit of higher studies. When his move was thwarted, he quit the Congress party that he had been a part of and founded the self-respect movement.

Nearly a 100 years on, the fruits of social justice born out of the self-respect movement are being harvested in Tamil Nadu thanks to the seeds sown by Periyar. People of oppressed communities who were denied education and disparagingly told to “go and graze cattle” are today shining as engineers, doctors and so on as a result of community-based reservation.

Immediately after the independence, when the Constitution was framed, the reservation policy that was in force till then was suddenly quashed by court order. Periyar’s strong reaction to it is what led to the first constitutional amendment in this regard.

So, the question of why religious Tamils hail Periyar as a hero is quite evidently answered by the fact that the millions who benefited from reservation are certainly likely to shower their affection on the person who championed their rights.

Another segment that benefited from Periyar’s views are women. He had strong views in favor of feminism. He unhesitatingly criticized religion, which aided in the slavery of women.

Periyar believed that change must begin at home, before one can preach to others. When his 10-year-old niece lost her husband a month after her wedding, Periyar got her remarried. He did this despite facing stiff opposition from the family.

He brought in various resolutions and got them passed at the self-respect conference held at Chengalpattu in 1929, which had significant and far-reaching impact on women’s rights. One of the important resolutions demanded equal property rights for women. Though attempts were made in this regard in independent India, only in 1989 during the DMK government did this become law in Tamil Nadu.

The rest of India caught up much later, in 2005, when the union government passed a law safeguarding the interest of women, when  Manmohan Singh was the Prime Minister and DMK was an active partner of the coalition government.

Raising the age of marriage for women

Early on, at a time when child marriages were the norm, Periyar had demanded that the minimum age of marriage for women should be raised so that they are not weighed down by domestic responsibilities at a tender age that would ruin their life. It was raised to 18. And now the current union cabinet has agreed to bring legislation to increase the age of marriage for women to 21 on par with men. 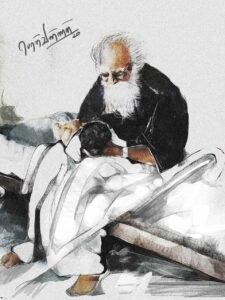 Periyar also advocated for the right of women to select their own partners in marriage, whereas arranged marriage was the norm and largely continues to be. He expressed progressive ideas that were at the time thought to be extremely controversial. He said childbearing makes women’s lives complicated and puts a burden on them; instead, babies should be produced in laboratories. Periyar expressed these ideas at a time when the concept of test-tube babies was still far into the future.

Undoubtedly, Periyar’s outlook and views were shocking and unacceptable to orthodox, conservative societies.

The pragmatic leader even advised that houses should be built without kitchens, so that women don’t waste their time slaving over the stove. Instead, community kitchens should be set up, he wrote this in his famous book, Penn Yaen Adimai Aanal (Why has Woman Become a Slave). This was at a time when women were relegated to the kitchens and had no standing in society. Although the concept did not quite take off immediately, today we are witnessing an increase in community kitchens in our society.

Periyar was very practical in his suggestions. He said women should cut their hair like men and wear pants and shirts for ease and comfort, instead of complicating their lives with sarees. Recently, a few schools in Kerala brought in common uniforms for both boys and girls in their campuses, which exemplifies Periyar’s farsightedness.

Brahmins too benefited from Periyar’s views

Though there has been a misconception that Periyar opposed brahmins, it was never about individuals. His opposition was to brahminical authority. In fact, he had many brahmin friends. Sivasankari, a famous writer from the brahmin community, once in an interview to a Tamil weekly said that brahmin widows of Tamil Nadu should ever be grateful to Periyar for the transformation in their social status.

What the visionary leader did for women will always be remembered with affection. After all, women in Tamil Nadu are living examples of the progress his ideals brought to their lives.

Periyar is also known for his role in the fight against discrimination. In 1924, when a young lawyer from a lower caste walked on the street adjacent to the Shiva temple in Vaikom, Kerala, he was assaulted. There were widespread protests. But it was thwarted by the police. To intensify the agitation Periyar was invited. His prolonged fight led to his rigorous imprisonment. But ultimately he won the battle when the government ordered that people of all castes could walk on any street.

Similarly, Periyar fought and succeeded in ending the practice of discrimination in serving to people of oppressed castes at the Cheranmadevi gurukulam run by Va Ve Su Iyer.

Despite being an atheist, he understood the importance of the need for people to be treated equally everywhere, even in temples. He fought for the right of people from all castes to perform pooja inside the sanctum sanctorum of temples. His dream has recently been realized after a long court battle.

Could it be any clearer why Periyar is liked by the religious?

For a people who had long lived through the oppressive social hierarchy of caste, religion and gender, Periyar’s words opened up their minds, particularly to the concepts of social justice and self-respect.

Visionary leader who foresaw the future

In his book, Ini Varum Ulagam (The World to Come) Periyar envisaged the possible advancements the world would make in science and technology. When even Graham Bell’s version of the telephone was not widely known about, he wrote about how there would be a wireless telephone and also facilities to see each other while talking on the phone. Today video calls have become common. Periyar was a humanist. He firmly believed every species had a right to live on this planet. When he advocated contraception, people asked what if there were no children in the future. He quipped that we need not worry as the world does not belong to us alone. He was also harking back to his view that the world was not created by gods.

Periyar’s ideologies are against those of the conservatives and the fundamentalists. So, it’s no surprise that they oppose him, and their opposition takes on newer avatars to take on the progress made over time.

But even 48 years after his demise, Periyar continues to live through his works, and his teachings act as a perfect antidote to all social ills. Is it any wonder then that this tall leader is a much-beloved icon of the Tamil people?