The tri-services Court of Inquiry (COI) constituted to probe the copter crash that killed Gen Bipin Rawat, India’s first Chief of Defence Staff (CDS), his wife and 12 officers has submitted its preliminary report. The Mi-17 V5 helicopter crashed in Nilgiris on December 8, 2021. The committee was headed by Air Marshal Manvendra Singh, who has apparently briefed the defence minister about the key findings of the preliminary report.

Although the full report of the preliminary findings has not been shared with the public, the Delhi Press Information Bureau (PIB) has said that the COI has ruled out any mechanical failure, sabotage or negligence as a cause of the accident after analysing the Flight Data Recorder (FDR) or the ‘Black Box’, Cockpit voice recorder and all other available witnesses.

This report finds that the actual cause of the accident was a result of the helicopter’s entry into clouds due to unexpected change in weather conditions in the valley. The entry was shot on the mobile phone by a tourist and widely shared on social media platforms.

Based on this evidence, the preliminary report concludes that a sudden weather change led to the pilot’s spatial disorientation resulting in a Controlled Flight into Terrain (CFIT). The CoI has made some recommendations which are being reviewed by the services but have not been shared with the public.

According to the US Federal Aviation Authority, CFIT is defined as “unintentional collisions with terrain (the ground, a mountain, a body of water, or an obstacle) while an aircraft is under positive control. Most often, the pilot or crew is unaware of the looming disaster until it is too late”. A key concern that has emerged is that such accidents should not happen in the future. To help in achieving that, another question comes to my mind: Whether one should accept the CoI on this issue as final or should it be further probed by other agencies as well? Since we don’t know what the findings of this preliminary report of CoI are and what will be the next course of action on this matter it would be erroneous to speculate about the loopholes of the CoI at this juncture.

It is reported that there have been some five accidents involving the chopper type in the last six years. The hope is that the Mi-17 V5 does not become a ‘flying coffin’ similar to the MiG-21.

Nevertheless, the situation warrants a more ‘comprehensive investigation’ into the past accidents of Mi-17 V5 as well as analysis all data related to the accidents. The report should then be made available for public scrutiny. It is reported that there have been some five accidents involving the chopper type in the last six years. The hope is that the Mi-17 V5 does not become a ‘flying coffin’ similar to the MiG-21.

This incident has exposed that even VVIPs are not safe from accidents. Alarmed VVIPs are now wary of helicopter rides in even normal weather conditions.

Prime Minister Narendra Modi was to fly the same model helicopter, which crashed and killed Gen Rawat, to reach the National Martys Memorial at Hussainiwala from Bhatinda earlier this month. Due to apprehensions over bad weather, agencies tried to take him by road which had inadequate security arrangements, leading to a major security lapse, in the words of the Ministry of Home Affairs. A flustered Modi had reportedly told Punjab policemen to tell their chief minister he was safe. 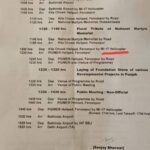 There are some 151 Mi-17 V5 helicopters being used by the tri-services and operating in different terrains and climatic conditions. Ten helicopters are under the Ministry of Home Affairs (MHA) for VVIPs.

Pilot training
Another important issue raised by this accident is training of helicopter pilots in the tri-services. Do we have enough pilots trained on the latest machines and gadgets? It is expected that the recommendations of the findings should percolate down to the training manuals of pilots to address CIFT syndrome. Lack of situation awareness perhaps emanates from pilots’ over confidence about their ability to respond to a sudden crisis due to his/her seniority in terms of number of flying hours.

No matter how the report is concluded such accidents should not happen in the future. CIFT logic cannot justify mistakes – technical or human. Otherwise it may reinforce ‘Chopper Phobia’ not only among VVIPs but also among the common public. To address that, the tri-services must review/update their aviation safety policies and SOPs time and again.  The MHA may consider operating choppers exclusively for designated VVIPs with the best trained helicopter pilots.