The painter who democratised Hindu religion

By the time of the 19th century, the caste system had come to such a pass that a majority of the population was considered untouchables and  temples had closed their doors on them. Poor, underprivileged, marginalized folk could not enter Hindu temples for worship. But defiance of this order was also happening. Protests were breaking out. Though their impact was limited, the incidents kindled a rethinking on the issue.

Meanwhile, European technologies introduced in India were changing society. The printing machine was one of them. There was then technology to mass produce images of deities on paper. The images of Shiva, Parvathi, Vinayaka, Murugan on peacock, Lakshmi, and Saraswathi could be painted in colour and copies could be made. These images transformed the rooms of middle class households into temples.

We could say that Bhakti or devotion to gods among middle classes got a boost as a result. What temples had smothered and temple entry movements could not achieve was happening through technology.

The path traversed by this process is an interesting one. The oleograph technology of printing oil paintings was invented by Germans. This technology entered British India. Painter Raja Ravi Varma, who was popular during that period, was from Kerala. By adopting western painting techniques, he gave life to the paintings of gods and goddesses. Men and women of Kerala were his models. As he was of royal descent, elite society patronised his art form and accepted it with zeal.

Raja Ravi Varma was born in a royal family in Kilimanoor in the princely state of Travancore, now in Kerala, in the year 1848. He obtained permission to access the Travancore palace library when he was 13 years old.

He came to know about the three dimensional paintings of Italian painters through books in the library. He became interested in painting and the techniques.

He tried to learn European painting techniques from the Travancore court painter, Ramasamy Nayakkar. As Nayakkar refused to impart the training, he approached Theodore Jensen, a Danish-born  artist who was in the court of Travancore. He also refused to train Ravi Varma, then a boy.

Ravi Varma was not disheartened by these refusals. The Maharaja of Travancore intervened and Ravi Varma was allowed to observe Theodore Jensen working on his drawings. Ravi Varma made full use of this allowance and learned the techniques by watching.

Ravi Varma learned not only the European realist painting techniques but also the techniques of Thanjavur painting, music and dance. It took nine years for him to become well versed in these art forms.

Raja Ravi Varma who was conversant in Malayalam, Sanskrit and English, painted Saraswathi, the goddess of education. The painting showed Saraswathi sitting majestically with legs crossed and playing the veena. Similarly, Ravi Varma drew the portraits of other popular deities.

In 1888, Gaekwad, the Maharaja of Baroda State, invited Ravi Varma as palace guest and got him to paint scenes from Ramayana and Mahabharata in 14 paintings. The Maharaja made them his private property.

Raja Ravi Varma, who was interested in selling copies of his artistic creations, established a lithographic printing press in Mumbai during 1894 with an investment of Rs 50,000 along with another shareholder. 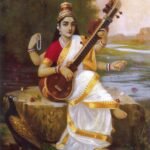 The first oleograph was derived from the painting of Raja Ravi Varma titled “Birth of Sakunthala” and was launched on July 12, 1894. The colour prints of this painting were sold at a price of Rs 6 each. Later the portraits of Lakshmi and Saraswathi were printed by this technique and sold at a cost of Rs 2 each. For the paintings of goddesses, Varma’s model was a Goan lady named Rajibai Moolgavkar.

As Mumbai was ravaged by the plague in 1898, the printing press had to be shifted to Ghatkopar. Later the press was sold to a German.

Through the new techniques, the portraits of Hindu deities could be carried on calendars, post cards, playing cards and matchboxes. Images of gods and goddesses spread all over India. They easily entered the houses of middle class families and adorned the rooms there. As many as 130 of the early paintings printed by the oleograph method are preserved at the C P Ramasamy foundation in Chennai. Most of them are paintings of Ravi Varma.

Raja Ravi Varma died at the age of 58 on October 2, 1906 due to diabetes. His paintings democratized Hindu religion itself by having the images of deities enter households.