Sorry, filmstars! There just cannot be another MGR

Thirtyfour years on since his death, MG Ramachandran (MGR), the matinee-idol-turned-politician, founder of the AIADMK and former Chief Minister, is obviously still a force to reckon with in the Tamil Nadu political landscape. There have been several scholarly attempts to decode the MGR phenomenon. Prominent among such writings are The Image Trap: M.G. Ramachandran in Film and Politics by MSS Pandian, MGR: The Life by R Kannan, MGR: The Man and the Myth by R Mohandas and the famous incomplete autobiography titled  Why I was born? (Naanaenpiranthaen in Tamil)

So who or what was the real MGR? Even the memoirs of some of his close associates such as KP Ramakrishnan, one of his bodyguards, or that of his contemporaries such as MN Nambiar or VK Ramaswamy  only repeat what has already been said. Perhaps they didn’t like to run the risk of profaning the well-constructed and cultivated image of a messianic and macho hero.

MGR was no great actor unlike Sivaji. Yet he could call the shots for 30 years in the Tamil cine world. Many actors with great potential were in the scene during his time.

There was one who could have upstaged him. But fate had other plans. Actor Ranjan was highly educated, well trained in music, martial arts, Bharatnatyam and horse-riding. Ranjan was a professional magician, journalist, writer, playwright, and an expert in fencing that he learned in Spain. He was also a license-holding pilot. Following major hits in Tamil such as Chandralekha, Mangamma Sabatham, he acted in Hindi films too such as Nishan.

Ranjan was indeed superstar material and would have towered over everyone with his great learning and versatility. Ranjan could have been a powerful rival to MGR, with his growing popularity.  Even Chinnapa Devar, MGR’s close friend and favorite film producer, featured Ranjan in the film, NeelamalaiThirudan. A shot of Ranjan riding a white horse and mouthing an MGResque song, more convincingly than even MGR, indicates what Ranjan could have been.

But, just as MGR’s career was on the upswing, Ranjan’s inexplicably fell into a slump. Ranjan’s last films such as Captain Rajan bombed at the box-office, driving him away to New Jersey in the US where he taught as a visiting professor until his death in 1983.

Context made him king

MGR was no great orator, had no freedom fighter credentials, and was not a shrewd Machiavellian like his friend-turned-foe M. Karunanidhi. Yet he triumphed.

Charisma is probably the best reason one can think of. It’s what drove the masses to the cinemas to get swayed by the mystique of his magical face radiating the image of a do-gooder, a messiah, a savior of women and an upholder of values; women, particularly at the lower rung of the society, saw in the make-believe world an affectionate son, a romantic lover or husband, a brother moving the heaven and the earth to ensure the well-being of his sister. Renowned Tamil writer Jayakanthan wrote a novel “Cinemaakku Pona Sithalu” (A construction woman worker who went to cinema), heaping scorn and sarcasm on the MGR wave.

MGR was no great orator, had no freedom fighter credentials, and was not a shrewd Machiavellian like his friend-turned-foe M. Karunanidhi. Yet he triumphed. 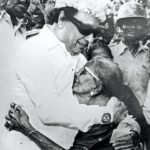 His honest-to-God humanity?There are countless tales of how MGR went out of his way to help  even his enemies in distress.  Cho. Ramasamy, a strident political critic, once said if any man was in need of money for food, he could knock on MGR’s door and surely would come back with rice bought with MGR’s money. Such was MGR’s generosity and magnanimity! That was why Roberet L. Hardgrave Jr in his book, Politics and Film in Tamilnadu: The Stars and the DMK, called him “the hope of the poor”.

What can certainly be said is that MGR’s life and career holds no formula that anyone can copy. His was a coming together of many factors: personal, political and social. It would be impossible for a similar combination to repeat. There just will not be another MGR.