TN pioneered beggar rehabilitation but has given it up

During an assembly session in July 2019, when AIADMK was in power, then Social Welfare Minister V Saroja said that Tamil Nadu had no beggars. The minister derived this from a logical calculation as she was answering a question raised by an opposition party member. Street dwellers cannot be deemed beggars. Beggars are the ones who are arrested by police under Tamil Nadu Prevention of Begging Act, 1945. It has been a while since Tamil Nadu police arrested beggars, so there are no beggars?

Recently, the Union Ministry for Social Justice and Empowerment responded to the query that there are 4,13,670 people begging in India according to the 2011 census. Among them, 61,311 were minors, amounting to 14 percent. West Bengal topped the list while Lakshadweep scored last place with two beggars. Tamil Nadu scored ninth place with 6,814 beggars including 782 minors, according to the Union Ministry. 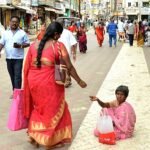 Anyone seeking alms for a living is a beggar. If we keep our eyes open, many are found in traffic signals, bus stations, pilgrim and tourist centres in Tamil Nadu. So what happened to the state’s beggar rehabilitation programmes?

Beggar rehabilitation can be traced to a British-era rule in Tamil Nadu. Beggary was illegal in the British Raj. Anyone found begging were arrested and lodged in jails under Tamil Nadu Prevention of Begging Act, 1945. After the British left, rehabilitation was still in vogue. The Congress government in Madras Presidency constructed a rehabilitation centre at Avadi, city suburbs then, in the year 1954. The sprawling 10 acres facility has lodging facilities and workshops.

Anyone seeking alms for a living is a beggar. If we keep our eyes open, many are found in traffic signals, bus stations, pilgrim and tourist centres in Tamil Nadu. So what happened to the state’s beggar rehabilitation programmes?

Officials with the department said that the last of the inmates in Beggars Rehabilitation Centre at Avadi were released in 2016. The building is in a dilapidated condition. During Covid, the state government tried to use the facility as a temporary hospital. But the authorities found the building condition is not dependable. Police don’t impose the beggary act stringently now. Even if they are arrested, magistrates don’t remand them beyond two or three days.

After the rehabilitation centre was constructed by former Chief Minister Kamaraj, the DMK government under M Karunanidhi introduced more rehabilitation measures. Night shelters were constructed in Chennai, Madurai and other major cities. Special centres were created for beggars suffering from leprosy. These centres were started in Paranur near Chengalpet, Salem, Madurai and Thanjavur. The beggars were brought to these centres and were rehabilitated. With regime changes, this novel scheme fell apart, says social activist Arul from Karunai Ullangal NGO. “The rehabilitation centres started by the DMK government don’t function effectively. We don’t get adequate support from authorities even in genuine cases needing rehabilitation,” he says. The night shelters are still functional in Tamil Nadu and other cities. The beggars, however, are not interested in utilizing these night shelters. Many prefer to roam around in the streets. Even if they are forced to stay in these shelters, they tend to misbehave and trouble other inmates of these facilities, activists said.

Official sources say that the government is keen to construct a new building at the Rehabilitation Centre at Avadi. It is a fact that Tamil Nadu still has beggars. The DMK government should revive the old schemes. Only determined measures could rehabilitate them in the true sense, activists say.