Come, let’s go for a ride in the SUV used by CM Stalin

The car this man uses has so much power that it can zoom to 100 kilometers in less than eight seconds. It is designed to go off the road and negotiate dirt tracks, gravel roads, or just climb hills over soil and pebbles. Yet, the stress is more on safety than just power and ruggedness. For instance, the flashlights of this car automatically go dim so the driver of the vehicle coming in the opposite direction is not blinded and the car slows down if the vehicle ahead brakes. Besides the driver, six others can sit with their legs stretched out. The air inside is purified constantly and kept allergen-free.

Priced at around Rs 1.27 crore, the vehicle that Tamil Nadu Chief Minister M K Stalin uses, the Land Rover Defender, is heavy, built to rove and yet is among the most technology packed and versatile SUVs out there.

Priced at around Rs 1.27 crore, the vehicle that Tamil Nadu Chief Minister M K Stalin uses, the Land Rover Defender, is heavy, built to rove and yet is among the most technology packed and versatile SUVs out there.

The performance
While driving around the city, a gentle hum is all that anyone inside and around can hear. The Land Rover Defender’s real power is unleashed when it hits the highways.

Land Rover went for inline engines and dropped the V engine. Efficiency was more important than power density for Land Rover riders such as Stalin. Yet, at 295 BHP, the Land Rover Defender engine is more than twice as powerful as the sedan.

At 295 BHP, the Land Rover Defender engine is more than twice as powerful as the sedan.

The comfort
The interior of this SUV gloats of utility, although there is no compromise on luxury. The cockpit has room for the driver and a shotgun passenger (of course) while the two rows in the rear of the vehicle can accommodate five passengers with ample leg-room. Heated seats are available too. But Stalin may not need extra heating in tropical Tamil Nadu.

The tech
Head-Up-Display feature gives you vital information like speed and navigation on the windshield, so that the driver can keep his/her eyes fixed on the road without glancing at the instrument cluster for information. The touchscreen infotainment display, dearly known as ‘Pivi’ by Land Rover, displays all the doo-dahs the sensors pick up.

A feature that Land Rover has added on to the Defender is the Matrix LED Headlights with Adaptive Lighting Beam that detects oncoming vehicles and dims the headlight in specific areas so that the lights don’t obstruct the oncoming car’s driver vision. Another addition to the Defender is ‘Cabin Air Ionization’ that improves air quality inside the SUV by filtering out allergens and airborne bacteria.

Safety features
Adaptive Cruise Control informs the SUV to slow down while the car in front brakes or comes to a halt. The Blind Spot Assist feature detects other cars approaching from spots around the vehicle that has limited visibility. The Blind Spot Assist alerts the driver when another vehicle is trying to pass the area around the Defender which is not visible on the rear-view mirrors.

Talking about cameras and rear view mirrors, Land Rover has placed a rear-facing camera on the top of the Defender which shows a roof-top view of the rear on the cabin rear-view mirror. Another feature involving cameras is the 3D surround view that will aid parking in tight spots by eliminating blind spots. The circular Daytime Running Lights around the headlights gives on-lookers an impression that the Land Rover has beastly eyes. The clear-cut edges and the chiseled body of this machine make it look the ultimate off-roader, yet a gentle and capable on-roader.

Off-road capability
The Defender 110 SE is equipped with several modern technologies that give the driver a ‘go anywhere, do anything’ attitude. All Wheel Drive (AWD) is assisted with electronic traction control to let the occupants tackle any challenging driving condition.

The Land Rover’s ClearSight Ground View option has strategically placed cameras under the SUV to display live view of the surrounding terrain. The driver can exploit this feature by navigating through tough terrain without exiting the Defender or put his/her head out the side-window to check the surroundings.

The Land Rover’s ClearSight Ground View option has strategically placed cameras under the SUV to display live view of the surrounding terrain. 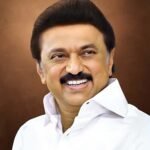 For the literal rough terrain, the Defender will help Stalin. For the metaphorical rough terrain that is state politics, Stalin would need his wits though. (Source: Arunjkumar007: Wikimedia Commons)

The Configurable Terrain Response is a first in the world feature that enables individual configuration of steering, powertrain, differentials and traction control which allows the vehicle to move with minimum loss of traction on all terrains. The ‘Terrain Response 2’ mode smartly chooses the right configuration for the terrain, thus avoiding wheel slip on off-road terrains and aiding cornering while driving on road.

Electronic Air Suspension in addition to Coil Spring Suspension allows the Defender to adjust its height and increase ground clearance. In a state were speed breakers can give nasty surprises, Stalin’s SUV will not be damaged by nasty bumps on its underside. A water-wading height of 3 feet can help the Defender wade through safe water crossings.

The increased sidewall depth of the tyres means that they can withstand more damage and are less prone to punctures. Finally, the approach and departure angles are designed to enhance off-road driving.

The SUV that Stalin uses can help him navigate dirt tracks, gravel roads or just climb mountains treading on soil and small rocks. For the literal rough terrain, the Defender will help Stalin. For the metaphorical rough terrain that is state politics, Stalin would need his wits though.