Among this year’s Padma Shri awardees from Tamil Nadu is VK Munusamy, a self taught terracotta artiste. His creations include a 21 foot terracotta figure of Periyasamy that took him seven months to complete. It will be consecrated this January.

Fifty-year old Munuswamy who has got the UNESCO Seal of Excellence award specializes in making terracotta figures of village deities.

Munusamy was born in a potter’s family at Arulmozhi near Jayamkondan, Kumbakonam. He counts himself as the 22nd generation potter in his family.

From a young age, pottery fascinated him. The family lived near Villianur that was frequented by foreigners coming to the Villianur Matha church. The foreigners were frequent buyers of pots and terracotta figures his father would make. All this drew Munusamy more into terracotta sculptures.

Besides the Periyasamy figure, Munusamy has made Ponnusamy, Sengamalai Iyyan figures of 17.5 feet at the Siruvachur hill in Perambalur district. He has also installed a 13 foot horse terracotta figure there. Munusamy says those figures have been destroyed. “I continue to make village deity figures in terracotta whenever people ask for it,” he says. One of Munusamy’s terracotta works

Munuswamy had little interest in studies and stopped school after Class 8. From Class 6 to Class 8 he learned crafts such as moulding and carpentry. He joined a toy making company in Bengaluru. After a year at Neduvangadu in Palakkad. Then he learned the nuances of sculpture making from the Ariyanadu Rajendran, who was working in Thiruvananthapuram Medical College as artiste modeller. A portion of the massive terracotta sculpture

In 1989, seeing his terracotta cart figure, he got the opportunity to teach women at the District Industries Center. Since then he has been giving training on terracotta sculpture to aspiring artistes and taught at national and international level workshops. “Some 800 women have got a livelihood making terracotta figures. I have taught some 10,000 women and 3 lakh students in the last 33 years. His works have been exhibited across the world including in the US Germany, France, Spain and so on. His dancing horse terracotta sculpture has been exhibited at a museum in New Jersey. 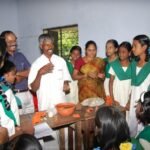 In India, Rashtrapati Bhavan has hosted his work. The awards he got includes Best Master Artisan in Spain in 2004 and Master of Indian Craft in Romania. He has headed handicrafts agencies in Puducherry government. He was instrumental in getting GI certification for Villianur terracotta sculptures.

Munuswamy did not complete his school education but his two sons are college educated. They are also keen on terracotta sculpture making, he says, adding this craft should not die out.