Simbu is one of the imponderables of Tamil cinema. His movies are rare and they are not always hits. Yet, every movie release of his comes with a buzz and gets talked about. Simbu has had many comebacks in his career. He changes tack in the characters he portrays to stay relevant.

Simbu has created an image for himself – a Manmadhan, a lover boy and a ladies man. Whether as a child artiste or as an adolescent in Monisha En Mona Lisa, Simbu did not seem to be growing into that image. Manmadhan was a point of departure in which the Simbu of the future was reinvented. Until then Simbu had sought the niche of a Little Superstar. After Manmadhan, the rakish image started to grow on him.

Instead of being a character he played, the image became his reality. And he seemed to like that tag. His choice of movies bore out that image, so much so that his movies acquired a tag of “non-family” pictures. People couldn’t go and watch his movies with their families.

Adding to that, Simbu made no effort to deny cinema gossip about his personal life. But the seamy image he had created for himself started to take a toll on the box office performance of his movies.

Simbu was at a point of being written-off when Maanadu hit the screens. Maanadu is a hit, by all accounts. In the movie, Simbu is not the typical Simbu. The heroism, punch dialogue and build-up shots are missing. So is his latest comeback here to stay?

Maanadu is a hit, by all accounts. In the movie, Simbu is not the typical Simbu. The heroism, punch dialogue and build-up shots are missing. So is his latest comeback here to stay?

Son of multifaceted T Rajendar, Simbu presented himself as a big fan of Rajinikanth initially. His antics seemed to ape the superstar in Dum. In Thotti Jaya, he crossed over to Kamal’s Sathya in playing a henchman. But the success of Manmadhan seemed to convince Simbu to do similar movies.

Saravana, Kaalai and Silambattam had Simbu’s characters having an edgy, villainous side although his style and “heroism” earned audience applause. By the time of Vallavan, Simbu’s own production, his characters were like all Tamil heroes. But they did things that Tamil film heroes didn’t typically do and still don’t do. They had sex outside marriage. They killed people and got away. Sometimes their madness was not occasional but fully psychotic.

Simbu’s quest for adding an edge to himself to create an identity seeped into real life. He would habitually come late for shoots. And this piece of news wasn’t known only to people in the industry but was well known among film viewers. They weren’t quite convinced by some directors’ testimonials that Simbu would finish the work on time even if he came late to sets. Simbu missed out on playing in successful movies such as Vettai as a result. Even Maanadu was in trouble during its making. There was talk that Simbu would act in a counter movie called Maha Maanadu. But, apparently, a compromise was reached between the makers and Simbu.

Gautham Menon’s Vinnai Thandi Varuviya  got him new fans, including women who may have baulked at the lecherous, villainous Simbu persona. Vaanam and Poda, Podi too were out-of-character. But Osthi, based on Salman Khan’s corrupt cop role in Dabangg, sent Simbu back to his earlier version.

Since 2011, Simbu has had the occasional success such as in Vaalu or a noteworthy performance such as in Mani Ratnam’s Chekka Chivantha Vaanam. But his flops were more frequent – Anbanavan, Asarathavan, Adangathavan and Vantha Rajavathan Varuven. The Simbu style had become un-saleable.

The Simbu style had become un-saleable

Simbu does seem to have read the tea leaves. In a recent interview, he extolled Sarpatta Parambarai and with candor said the old punch dialogue, build-up shot and heroism will not work anymore. Realistic heroes are not new Tamil cinema although they have never been the norm. 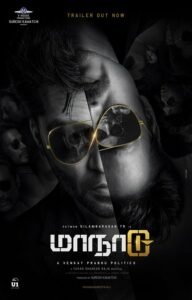 Just as his characters on screen sprang surprises, Simbu has come out with a hit in Venkat Prabhu’s Maanadu. The Simbu style and punch dialogue are missing in the movie. He doesn’t tease women, show his male preference for dominance, nor does he indulge in self-praise. All that is reserved for SJ Suryah and Simbu has coolly allowed the possibility of SJ Suryah overshadowing him. But most viewers walk away from Maanadu and call it a Simbu film even as they don’t forget to talk about SJ Suryah.

It remains to be seen if Simbu will take Maanadu as an example. In the past, besides a few films such as Thotti Jaya, Accham and Vinnai Thandi Varuvaya, Simbu has rarely played realistic heroes. In any case, after doing these movies, he lapsed into the old heroic Simbu.

Chekka Chivantha Vaanam was a Mani Ratnam movie and Simbu can take little credit for his character. The subtleties of Ethirajan, the last born son who wants to have the mother for himself, were rather lost on Simbu.

Simbu has put in at least 20 years in films as a hero. If he were to make a mark and sustain himself, he may well have to stay true to his declared views on what would work in Tamil films going forward. He will have to infuse some discipline in an industry known for discipline, punctuality and work ethics unlike Bollywood. He just cannot allow rakishness in his real life and miss out on playing meaty roles.

Rajini adopted the strategy of spacing out his movies so the build-up was there and the buzz alone would be enough to payback the investment. Ajith adopted this strategy at a certain stage in his career. Cold, commercial calculations drive this strategy, not false self-belief. And Simbu is just not at Rajini’s or even Ajith’s level when an occasional movie would be enough. He will have to work at doing more films so he can settle down as the star he can be.