Athiyur Vijaya: Yet another tale of police brutality on Irulars

Jai Bhim, the Tamil movie on Rajakannu custodial death, has been trending across the state and the country. Controversies apart, the movie has earned praise from all quarters. Another story of brutality on an Irula woman is to be released as a book on Nov. 27.

At 17, Athiyur Vijaya was gang-raped allegedly by six policemen who took her into custody on the pretext of investigating a theft case. For the rest of her life, Vijaya fought a battle against authorities for justice. Vijaya died in 2014 at the age of 38. Journalist and writer Jothi Narasimhan has penned a book on her life, ‘Athiyur Vijaya’. Narasimhan has changed the name of the accused since the high court acquitted them.

At 17, Athiyur Vijaya was gang-raped allegedly by six policemen who took her into custody on the pretext of investigating a theft case. For the rest of her life, Vijaya fought a battle against authorities for justice

Puducherry police knocked at Irula woman Vijaya’s door at Athiyur near Gingee on Aug. 29, 1993. They had come in search of one Vellaiyan, relative of Vijaya, in a theft case. The six policemen were accused of kidnapping Vijaya from her house and raping her. The state government ordered an inquiry by district officials. Sub-collector Jawahar IAS during his investigation found prima-facie evidence on the charges. Based on the report, Ananthapuram police filed a case against the six policemen.

A fact-finding committee headed by senior advocate R Selvaraj from Gingee took up the case. The team consisted of Va Su Sambantham, Professor Kalyani alias Prabha Kalvimani and Sr Lucina. The committee presented their report at Puducherry on Sept. 29, 1993, saying that Vijaya was indeed gang-raped by the policemen.

Based on the report, the Tamil Nadu government ordered an inquiry headed by District Revenue Officer N Jegatheesan. He submitted his report on Feb. 7, 1994. Jegatheesan’s report also confirmed gang-rape and recommended compensation to Vijaya. The state government, based on the report, ordered an inquiry by CBCID while sanctioning a one-time compensation of Rs 25,000 to Vijaya.

Villupuram District CBCID took up the case and filed a charge sheet on policemen. Principal Sessions Court at Villupuram sentenced the six policemen to life imprisonment. After a few months of the verdict, the accused managed to get bail and were released from prison in Nov. 6, 2006. The lower court’s verdict was challenged by them at Madras High Court.

Munusamy, one of the accused, died in a road accident shortly after they were released on bail. The divisional bench consisting of Justices Sokkalingam and Venugopal set aside the lower court verdict and acquitted all the accused in 2008. 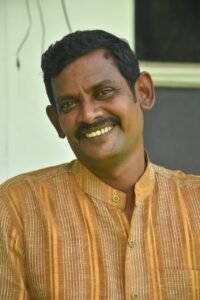 Elaborating on Vijaya’s legal struggle, Prabha Kalvimani said that their efforts for an appeal against the High Court verdict did not succeed. The accused were ready for an out-of-court settlement with Vijaya for a sum of Rs 3 lakh. But Vijaya did not yield despite severe financial crunch and was ready to fight it out till the end.

Vijaya’s father Masi was arrested by Tirupati police in a theft case earlier. “To secure his release, we filed a habeas corpus case at Telangana High Court. Human rights activists K G Kannabiran and Balagopal were of great help then. During this legal battle, we realized that police continue to frame innocent people from marginalized communities in cases in which they could not find the true culprits. We constituted the Pazhangudi Irular Pathukappu Sangam in 1996,” Kalvimani stated.

Justice K Chandru who has written a foreword for Jothi Narasimhan’s book has said that the policemen who allegedly gang-raped Vijaya were from Puducherry. But the local police were hand-in-glove to divert the case. Though the accused were convicted in the lower court, they managed to get acquitted. This did not dent the fighting spirit of Vijaya. She fought for the rights of the Irular community till she breathed her last. She may not be alive but her inspiring story will motivate many, says Chandru.

Jothi Narasimhan’s book will be released by Murugan from the Irular community. He was also a victim of police torture. Vijaya’s mother Thangammal is participating in the event.