The story behind Tamil Nadu’s poor showing in Swachh rankings

After five years of competing with one another, India’s cities ranging from over 40 lakh people to under 25,000, are struggling to handle their municipal solid waste. The latest official figure for Municipal Solid Waste (MSW) being generated in a day in the country, given to the Lok Sabha in August, is 1,40,980 tonnes.

The “challenge” competitions under Swachh Bharat Urban are five years old and the NDA government has pursued waste as its most high-profile, citizen-centric programme, epitomised by a Prime Minister wielding brooms and picking up beachside trash. Indian cities should by now have taken the road to a circular economy – achieving a lower growth rate of garbage generated each year, segregating and collecting it at source, and recovering all possible materials from trash to be deployed back into production of new goods and producing mountains of compost.

The latest Swachh Survekshan 2021 report of the Ministry of Housing and Urban Affairs on the best and brightest cities, however, presents an unusual landscape. Of 4,320 urban local bodies that took part, after all these years, only a fraction – 1,352 – could claim to collect garbage door-to-door, while the number that actually segregated wet and dry waste, so vital for recovery of materials and for environmentally-friendly waste management, fell to 472.

But there are clear contradictions too, which call for closer audit of the self-reported claims towards service level progress. A far higher number of 953 ULBs said they processed 100% of the dry waste they collected, than the number that claim full waste segregation at source, as the data above make clear. It is accepted in the industry that mixed waste does not aid recycling of materials, and a lot of plastic is worthless to the sector, since it is multi-layer packaging of the kind used by the grocery and confectionery producers. What is striking in the ranking produced by Swachh Survekshan is the low placement of Tamil Nadu, considered one of India’s most urbanised States.

What is striking in the ranking produced by Swachh Survekshan is the low placement of Tamil Nadu, considered one of India’s most urbanised States.

Too big to win? 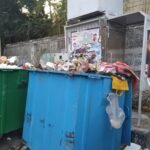 Chennai has struggled with its garbage issue as this picture from Nov 2021 on Viswanathapuram Main Road shows. In the background is a neglected, disused Swachh Bharat Mission public toilet

Although economically and socially advanced, compared to many others in the north, TN makes up the rear among the top 10 States going by the ranking. The latest roll of honour places Chhattisgarh once again at the top among States that have more than 100 ULBs, followed by Maharashtra, and Madhya Pradesh. This is identical to last year, although there is some jockeying for the next few ranks, with Gujarat and Andhra Pradesh making gains.

Why is Tamil Nadu seemingly a laggard on waste management? Of course, Chennai is included among the multitude of awardees as the best State capital for “innovations and best practices” – a tag it got even in 2020 – and Coimbatore and Madurai find a place towards the tail end of 48 big cities, while small towns such as Vedaranyam, Vaitheeswarankoil and Punjaipuliyampatti are featured in the south zone ranks.

The method adopted by the Survekshan has been questioned in the past, since it could not ultimately produce a turnaround in the way solid waste is processed, and unduly emphasised cleanliness over waste management. The design of the 2021 survey raised the weightage of the ‘Service Level Progress’ category, from 25% to 40%, representing 2,400 marks out of 6,000. The SLP partly subsumed another metric, ‘Direct Observation,’ while members of the public were given a greater “Citizens’ Voice” in the process by apportioning 30% marks to their assessment. The other 30% was made up of certification of claims.

Uniformity can still elude the way cities are assessed. Only an independent audit can certify whether all teams that participated in the evaluation followed the assigned protocol uniformly. The report of the Survekshan in the public domain provides results, but the original data on, for instance, recovery of materials, methods used to process waste and growth rate of waste generation going to the landfill are needed to throw light on what the exercise actually achieved.

Again, has the smart cities programme missed the opportunity to achieve a turnaround in the past five years in conjunction with other funding options?

A question of transparency

Tamil Nadu has 664 ULBs, exceeding even Uttar Pradesh’s 652, according to the Survekshan, and has robust economic activity and consumption, reflected in a high State Gross Domestic Product. This is evident in its waste generation patterns, starting with mega city Chennai. Policy has trailed the pace of growth, however, and painfully apparent in the city’s waste management contracts that have largely stressed transportation of waste in compactor trucks over a  succession of outsourced arrangements – CES Onyx, Neel Metal Fanalca, Ramky Enviro, and Sumeet Urbaser – and providing little real insight into whether the State is on the road to a circular economy.

In spite of fresh expectations that arose with the renewed contracts issued last year to Sumeet Urbaser on source segregation, the system has failed in Chennai. The letter and spirit of the Municipal Solid Waste Management Rules of 2016, the Plastic Waste and Electronic Waste rules remain ignored.

Environmentalists are also concerned that without transparency, it would be impossible to track efforts to use plastic waste as fuel, an approach that some energy-intensive industries favour as a solution to unprocessed garbage. The Break Free From Plastic Pan-India Brand Audit Report 2021 identifies five companies that make up the top five slots of “polluters”, judged by brands clearly discernible from 70% of 1,49,985 pieces of plastic. These are familiar companies, such as Parle, ITC, Britannia, Haldirams and United Spirits. Multi-layer plastic constituted the maximum at 35% samples, followed by “sachets” made of Low Density Poly Ethylene. Packaging may be convenient, but pollution from non-recyclables is a State problem.

Regardless of who wins the Survekshan rankings each year, the issue of how a growing wave of waste will be handled in India remains. The search for alternatives and the campaign for reduced use continues, and Tamil Nadu has the big opportunity to carry out a clean-up. The goal is to get residents to sort “wet” and “dry” discarded material from residential and commercial sectors and get waste handlers to sort them for scientific handling.

A good start would be to recognise that ‘waste’ is a resource, and compensate citizens with incentives and rewards for playing by the rules: when they hand over sorted garbage. For the waste management companies, it should be non-negotiable that they will reduce the volume of dumped waste in a clearly audited manner. That is the looming, real Swachh challenge for all Indian States.