Mathisport: How cashews, peanuts crowd on top of Deepavali mixture

Let’s do a small experiment at home. Take a glass; place two or three unbroken whole cashew nuts at the bottom. Fill two-thirds of the cup with smaller nuts such as peanuts or roasted Bengal gram. Now shake the glass well. Lo behold, you can observe the cashew nut raising up to the top, contrary to our intuition. How come the bigger and massive cashew come up to the top?

Figure 1: In a Bombay mix, chivda or a packet of south-Indian ‘mixture’, we can see more giant nuts float on the top due to a remarkable physical phenomenon, called the Brazil nut effect

People have noticed that dried fruits or nuts in the breakfast cereal mix are not spread out inside the box. In the western breakfast cereal mix, such as Muesli, the Brazil nuts gather at the top. Hence this phenomenon is called the ‘Brazil nut effect. A typical packet of south Indian savoury snack ‘mixture’, containing an assortment of peanuts, kara boondhi, roasted chana dal, oma podi and thenkuzhal, Karasev, murukku broken into small pieces, the more giant peanuts or cashew can be observed to float on the top.  Urban legend claimed this to be a deliberate marketing gimmick to lure the customers. Nevertheless, recently it has been found that the physics behind it is surprisingly complex. Although scientists noticed this phenomenon in various contexts, from asteroids to river beds, how and why this occurred has remained a mystery.

In the heavens too

Brazil nut effect is not seen just over the breakfast table; astronomers say it helps understand the puzzling asteroids. Too small to be called planets,  millions of asteroids, ranging in size from hundreds of kilometres to several centimetres across, revolve around the Sun. They are also classified as planetoids or minor planets. They are made up of rocks, boulders, granular sand and ice loosely bound by weak gravity.

From the Earth, these space rocks look like a speck. However, when spacecraft such as the Galileo mission in 1991, Near-Earth Asteroid Rendezvous (NEAR-Shoemaker) mission, the European Space Agency’s Rosetta mission and the Japanese spacecraft Hayabusa, they gave the spectacular close up view of the asteroids. The surface of the asteroids was puzzlingly riddled with large boulders.

Consider the images captured by the Japanese Hayabusa that explored the asteroid (25143)-Itokawa during 2005. The data gathered by the spacecraft suggests that whooping 40% of the interior of the 535-meter long asteroid is simply void. The asteroid is nothing but a pile of rubble loosely held together by its weak gravity and perhaps additionally glued by the cohesive electrostatic forces between individual chunks.

Hayabusa’s sharp cameras could see things as small as 6 millimetres across; however, 80% of the surface of the Itokawa is studded with boulders a few meters to 50 m across. Hardly any smaller sized sand granules were found on the surface. The smallest were centimetre-sized gravels. Nothing smaller than these gravels were observed, making the astronomers wonder, where did the smaller sand granules go?

Out in the open space, frequently smaller space rocks impact these asteroids. When such collisions occur, they create wide asteroid quakes. These quakes shuffle the granular objects. In this cosmic Brazil nut effect, astronomers postulate that size segregation has occurred with bigger boulders on the surface and smaller granules descending inside. 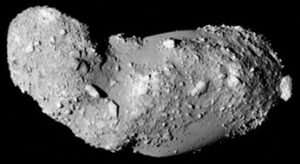 The Brazil nut effect helps the riverbeds from being eroded by fast-flowing water, claim geophysicists. Riverbeds are typically lined with larger cobbles on the top. At the same time, the smaller gravels and sand granules constitute the deeper layers. Only a big flood could dislodge the heavy cobbles lining the riverbed. Hence, they act like armour protecting the river from eroding.

Until recently, geologists postulated that fluid mechanics control the emergence of this pattern. As the flowing river water carry away the finer particles, the heavier gravel and boulders are left behind. Recent studies show that it is Brazil effect of granular convection that plays out, resulting in size segregation even in the riverbed.

A team of scientists led by Douglas J. Jerolmack, associate professor in the Department of Earth and Environmental Science in Penn’s School of Arts and Sciences, noticed that earlier explanations failed to consider the granular convection in understanding the riverbed dynamics. They constructed a river like a tabletop model and experimented with the phenomena in the laboratory.

In this custom-built channel, they used fluid embedded with a fluorescent dye. They were able to observe the entire plane of a mixture of particles. Using sophisticated software, they tracked the horizontal and vertical motion of the individual granules over time, even those buried under several dozen other particles. To their utter surprise, they saw Brazil nut effect in action.

They observed that two mechanisms propelled the granules. Those on the top were pushed by the flow of the water. While those under the interacted with the adjoining granules. As the flowing water shoved the granules on the top, they, in turn, induced the ones just below to jostle. These granules pushed the grains underneath and so on. This created a jostling motion that made the large boulders float up. Figure 3: computer simulations along with lab experimentation explain how the riverbeds are lined with large rocks.

In a nutshell, whenever and wherever granular medium is subject to various kinds of shears and vibrations, the counter-intuitive process of the Brazil nut effect is segregation of large objects floating up and the smaller granules descending down is seen. Understanding this phenomenon is not just recreational but help us in developing smart manufacturing processes wherever mixing granular materials of different sizes and densities are an essential part of the products, such as powdered metal alloys, pharmaceuticals, and pigments for paints.

A research team led by Parmesh Gajjar from the University of Manchester in England has now unravelled the mechanism that leads to the astonishing results of the Brazil nut effect.

Gajjar and colleagues used the X-ray CT scans to follow the motion of individual nuts in the mixture of Brazil nuts and peanuts as they were shaken back and forth on the research table. With these images, they created the first 3-D videos of the Brazil nut effect in action.

The oblong Brazil nuts rested horizontally in the container as the mixture was made. However, once the box was jolted, the nuts collied with each other. These collisions nudged some of the Brazil nuts to point vertically. As the Brazil nut took a vertical position, smaller peanuts fell down to fill up the vacated space. This pushed up the vertical Brazil nut. As the shaking processes continued slowly, the Brazil nut climbed up. Once the Brazil nut reached the top, it became horizontal and floated on the top of the peanuts. Figure 4: Temporal evolution of the sheared nut mixture, with nuts coloured according to their volume. The first Brazil nut reaches the top 10% of the bed height after 70 shear cycles, with the other two Brazil nuts reaching this height after 150 shear cycles.

With time-lapse 3D imagery, scientists have cracked how the “Brazil nut effect” works. The behaviour of three states of matter, being solids, liquids and gases, are distinct. Take a sand pile; it is not really a liquid; however, the behaviour is akin to a fluid when pouring.  Granular materials could, under certain circumstances, behave like fluids. Rock rolling down a hill can be described by the motion of a solid; however, when it is a landslide, the equations would resemble that of a fluid movement.

This is what makes the Brazil nut climb up and float.

Figure 5: Visualisations of three rising Brazil nuts. Initially, it is in a horizontal position and takes vertical orientation during the shakeup. As it reaches the top, once again, it floats in the horizontal direction.

(Mathisport is the inmathi.com science column. It is a tribute to the Mindsport column of Mukul Sharma)