Writer Bharathimani’s actions spoke as much as his words

Bharathimani who died earlier this week was not only known for his interesting and thought provoking writings but for the dignity with which he handled life’s challenges. His daughter said on his passing away that he faced disease with dignity.

Bharathimani had several faces: actor, writer and chef. His material for writing was largely drawn from his experiences. A gourmet, his cooking was aesthetic and eating was heartfelt. He would involve himself in service that others wouldn’t dare to take up but without a fuss, never taking credit. Bharathimani never lost himself in rituals and traditions.

Bharathimani was born in Parvathipuram in Kanniyakumari district. Born in a family of limited means, he finished his schooling and pursued college education in Delhi with the help of his relatives. He worked at an import firm and travelled all around the world.

He acted in movies and plays. His works drawn from his experiences have much flavour and teach lessons to readers. Bharathimani’s writings and acting gave him a fan following. For his magnanimity, Kanniyakumari folks call him Pattaiyya, which is also the name of the dialect spoken in the district.

Bharathimani’s writings and acting gave him a fan following. For his magnanimity, Kanniyakumari folks call him Pattaiyya, which is also the name of the dialect spoken in the district.

He lived with dignity and respected the dignity in others as well. This quality was a constant in Bharathimani who was 84 when he died.

Bharathimani’s death is a loss for those who question traditions and want to live a dignified life. Words reflect people’s character and their conduct. Talking about his father, Bharathimani said his father told him that he should be a human, not Gandhi. This advice became the basis for Bharathimani’s life.

Bharathimani wrote an article about beautiful women. The picture he used showed his nature. The article dealt with the pain of women who were victims of acid attack. Though their face and mind were damaged, they lived their life with hope. 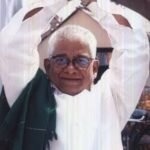 Bharathimani was a satirist of politics. In an article whose headline could be translated as “The story that Chinnamma says” (a reference to Sasikala), he called them fairy tales she spun.

When Chandrashekar was prime minister, Chandraswami was part of the Delhi circuit as a political fixer. When Chandraswami died, Bharathimani wrote an obituary. In that he wrote about how actress Leela Naidu, who acted with him in the film The Electric Moon written by Arundhati Roy, was travelling with him in a car in Delhi and asked that they take a diversion to Greater Kailash. She wanted to meet Swamiji. Without an appointment, she was able to take darshan of Chandraswami who welcomed her with a hug, calling her his sister.

The welcome was fitting for a beauty queen, co-star of Shashi Kapoor and writer Dom Moraes’ wife. When she introduced Bharathimani to him, Chandraswamy looked at Bharathimani with scorn. In the first glance they exchanged, it was clear that the dislike was mutual. After listening to Chandraswamy bragging about himself for half an hour, Bharathimani walked out of the house. Chandraswami didn’t bother about him leaving, Bharathimani has written.

This was a sample of his experiences with celebrities. He knew their inside stories and wrote about them in a matter-of-fact style.

I was talking to writer Nanjil Nadan about him. He recalled Bharathimani’s humanity. Nanjil Nadan talked about how Bharathimani had helped to cremate hundreds of discarded bodies in Varanasi.

As per his wishes, Bharathimani’s body has been donated to a medical college. There would be no death rituals for him.