Jai Bhim released on OTT is a smashing success. So was Sarpatta Parambarai. In my opinion, it was activist frenzy that led to their much lauded triumph.

I have not even watched Sarpatta Parambarai fully. The movie has many boxing sequences, and I am not a great fan of such scenes. The screenplay too was also almost pedestrian.

But a possible reason for its success could be that it was directed by Pa Ranjith who is emerging as a dalit icon of our times and it revolved around North Chennai, generally looked down upon by our middle classes. 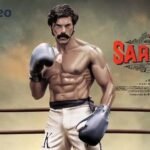 Apart from the role of our social media activists, subaltern scholars also should have felt it a duty perhaps to give a leg up to it. Well, that is too simplistic a formulation, still I don’t think the film deserved all those plaudits.

Remember dalit champions had gone gaga over even Rajini’s Kala, simply because it was Ranjith who had directed it?

So the Jai Bhim buzz only made me uneasy.   I generally consider Surya handsome and a relatively good actor, but his films are mostly pulp fiction. And throw into this ‘heady’ mix the chorus from the progressive sections once the film was out on the Internet. I was also wondering if the film-makers were seeking to cash in on the sway of the Jai Bhim slogan across the nation.

I was also wondering if the film-makers were seeking to cash in on the sway of the Jai Bhim slogan across the nation.

Art is not for art’s sake, yes. It is certainly meant for the people at large, as anything should be in a civilized society. But then arts have different sets of rules. Crude pamphleteering will not an art make, please. Many works celebrated during Joseph Stalin’s times were consigned to the dustbin of  history, you see.

Still given my own professions of  concern for the marginalized and oppressed, how could I keep away from the film!!

But nearly half-an-hour into it, it looked like I was wasting my time,  I felt so bored. The tribals, their lifestyle, romance amidst  poverty and their essential  humanity,  everything comes out well, ok. But it was all too clichéd for me, so  I soldiered on.

At one point, an arrogant  village head would be seen grumbling that the snake-catchers were like the camel peeping into the tent. The wariness and contempt of the upper castes fine, but the preceding dialogue does not lead to such a statement.

Again when money is passed on to the prison guards by a police seeking to re-arrest of the some released looks absurd. Would it all be so public? Couldn’t they have managed by some other subtle means?

There would be this scene when Rajakannu, the snake-catcher, helps start the stalled car of the person from whose house he had ferreted out the snake earlier. Refusing tips, he would say – “I don’t need any money… don’t we all belong to the same village?”  The woman would be irritated. Now which tribal would ever marshal such gumption, it beats me. It looked quite contrived.

After the robbery, the woman would say it should be the handiwork of the tribal who had had the cheek to be so familiar with her, and all hell breaks loose. Hurling baseless allegations against the downtrodden, one can understand. But does the police spring into action on such a whim alone, when there are no other corroborative straws?

Right through, the landlord would keep bugging the police to get at the suspect,  but nowhere would he talk about the jewels lost. That is quite funny, to put it mildly.

Even when the police close in on the fence, they would only ask for a couple of  pieces back to satisfy the bigwig – possibly the rest of the loot is to be shared alright, but it is not said so clearly. All along the stress is on catching the suspect and then making him confess, but little about recovering the stolen jewellery.

The movie gathers pace when Sengani is beaten and dragged to the station. Sadly, I guess no one noticed the melodrama of a pregnant woman walking miles on end to trace her missing husband, all by herself. Cinematic license gone too far.

There is a slight relief when we are told the story of the escape was totally concocted, for the escape is so ridiculously easy, it just defies any sense of plausibility. Besides there is no logical consistency – for the escape scene is supposedly drawn from the police point of view. Now if it is their version, how is it the three are seen limping out, Rajakannu particularly drenched in blood –  were not the police denying till then any  torture?

Piling on, sorry activists, we are told repeatedly, including by the judges, ‘There’s strong evidence of the escape, there are as many as three eye-witnesses…’ But then it is clearly their word against the petitioner’s. How would a mere claim by prosecution witnesses become strong evidence, that too for the presiding judges?

The mill-owner’s testimony does carry a measure of credibility, for he insists he heard Rajakannu over the phone, informing him of their escape. Yet again though it was the sub-inspector who had mimicked, is it possible for a non-professional to mimic so exactly as to be able to mislead a person who had known Rajakannu for years, and when the cops are seen so agitated at that point of time. And why should the three of them crowd the telephone booth, inviting the suspicion of the tea-stall owner, effectively torpedoing all their efforts.

Ok guys, let me stop here. Won’t inflict more on you. Despite all these flaws, it still can be called a good film of sorts.  Lijomol Jos as Sengani  has done a marvellous job, tearing at our hearts.

Despite all these flaws, it still can be called a good film of sorts.  Lijomol Jos as Sengani  has done a marvellous job, tearing at our hearts.

I choose to ignore the occasional theatricalities, like her Kannagi-type declaration before the police chief.  Prakash Raj too is another winner, portraying his role with his characteristic aplomb.

And as a few others too have pointed out, Surya deserves our kudos for not hogging all the screen space for himself, but allowing other actors their due and more.

Of course the piece de resistance is the  police brutalities, don’t think we have seen such a graphic portrayal in the past.

The rhetorical finish by Surya is a bit jarring, yes, still it can pass, followed as it is by the narration of what actually happened in 1993.

At the end of day, the crew deserves all our praise, in as much as they jolt the audience into the horrendous realities of state terror as also of an oppressive social hierarchy. They have not glossed over anything or tried to distract us through heroics.

So I would heartily rate it five or six, even if not a perfect ten. Warts and all, a must watch it is. Have I sufficiently sugar-coated?