Valliyappan Olaganathan Chidambaram Pillai or VOC was an important figure in the freedom struggle in Tamil Nadu. He had the guts to challenge the British monopoly in maritime trade by starting the Swadeshi Steam Navigation Company. The venture earned him the title ‘Kappalottiya Tamizhan’ but he earned the wrath of the British government. Sentenced to double life imprisonment and lodged in Coimbatore prison, VOC was subjected to the hard labour of being yoked to the oil press in place of bulls, thus earning the name ‘Sekkizhutha Semmal’.

Sentenced to double life imprisonment and lodged in Coimbatore prison, VOC was subjected to the hard labour of being yoked to the oil press in place of bulls, thus earning the name ‘Sekkizhutha Semmal’. Reprint of the book after 113 years

VOC’s struggle was the inspiration for many and the first book on his life was published as early as 1908 when he was jailed for sedition. M Krishnaswamy Iyer compiled the book from the newspaper articles on VOC published those days. The book was printed at Harihara printers. After 113 years, the reprint of the book is to be released on Wednesday. DMK MP Kanimozhi is releasing the book at the VOC memorial hall in Ottapidaram. Chief Minister M K Stalin has penned a foreword for the book. Chakra Trust’s Vithai Pathipagam has published the reprint.

The book ‘Sriman V O Chidambaram Pillai Jeeviya Saritha Surukkam’ narrates the humanitarian side of VOC. He was a barrister and used his profession to get justice for the downtrodden. The book also touches upon his courtroom skills in handling criminal cases. According to the book, VOC appeared free for poor people and used to charge based on the financial status of his clients, says Rangiah Murugan, who is one of the publishers of the reprint. Chakra Rajasekar is the other publisher.

After publishing VOC’s life story in Tamil in 1908, M Krishnaswamy Iyer came out with an English book on VOC titled ‘The life sketch of Sjt V.O. Chidambaram Pillai’. The book published in 1909 speaks about India’s dominance and fall in maritime supremacy.

With VOC incarcerated under sedition charges, the book avoids any political topics but narrates in detail about VOC’s Swadesh Steam Navigation. Krishnaswamy Iyer has mentioned in this English book that the objective of it is to sensitize people on VOC dedication to break the British monopoly in steam navigation. 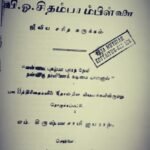 The copy of the book at the Roja Muthiah Library

“My friend Vijayakumar from Coimbatore was instrumental in getting this English book from the British Library in London. His friend Sathish Kumar from London helped us to get the book. The Tamil print was at Roja Muthiah library in Chennai,” Rangiah Murugan said.

Parali Su Nellaiyappar wrote an article on Nov. 28, 1908 about VOC being forced into hard labour in the prison, like yoking to the oil press.  He published this article in his magazine Karmayogi under the pen name ‘Thunbam Sagiyan’. Nellaiyappar also published another article on VOC titled ‘Sriman V O Chidambaram Pillaiyudan Santhippu’ (interview with VOC) in 1910.

After popular demand for a book on the life history of VOC, Nellaiyappar published a book on VOC as ‘V O Chidambaram Pillai Sarithiram’ in 1944. Thiru Vi Ka has penned a foreword for this book. Ma Po Sivagnanam penned another book ‘Kappalottiya Tamizhan’ in the same year, Rangiah Murugan explained about the publications on VOC.

After popular demand for a book on the life history of VOC, Nellaiyappar published a book on VOC as ‘V O Chidambaram Pillai Sarithiram’ in 1944

Murugan said that the reprint to be released on Nov. 17 will have both Tamil and English books published by Krishnaswamy Iyer. 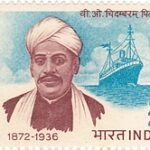 VOC was jailed in 1908 under sedition charges for addressing a public meeting with freedom fighter Subramanya Siva. VOC was also a trade unionist and the British were baying for his blood after he started Swadeshi Steam Navigation to challenge them. The judge who pronounced them guilty and sentenced VOC to double life imprisonment of 40 years has observed that VOC’s speech and Poet Subramanya Bharati’s songs are revolutionary.

For all the commotion on his arrest and sentence, no one turned up to welcome VOC when he was released from prison in 1912. He was driven to penury since the barrister’s license was revoked by the British government. He distanced himself from politics and concentrated on literary works.

As we step into the 150 birth anniversary of VOC, the book recalls the history of a great freedom fighter who faded away from public memory.