Chennai 2015 floods: When damage to rare books was the biggest loss

The people of Chennai bore heavy losses in the 2015 Chennai floods. Loss of life, property and livelihood was common. Among the precious belongings lost were collector’s items.

One such loss was Rengiah Murugan’s collection that included publications giving details of non-brahmin mutts in Tamil Nadu, references to the work of painter Kondiah Raju, some 2,000 photographs of tribes of north-east India and the Himalayas, rare interviews, and photocopies of important documents. A resident of Mookambigai Nagar, West Tambaram, Murugan recalls those days with sadness now as heavy rains lash Chennai.

A librarian at the Madras Institute of Development Studies, Rengiah Murugan has worked at the Folklore Support Center. He has written a book called Nizhal Padhai about the tribes of north-east India. He is now writing an extensive biography of freedom fighter VO Chidambaram Pillai.

Rengiah Murugan rues that he had not digitized his collections. Since his computer was damaged in the flood, many important digital documents were also lost.

When Chembarambakkam lake water was released, Murugan’s neighbourhood got flooded on December 2, 2015. People started locking up their houses and leaving for safer areas. “Our house was along the ground. We put rare collections on the loft, books on the upper shelves of the cupboard and other books on the cot. When water started coming in, we left for a safer 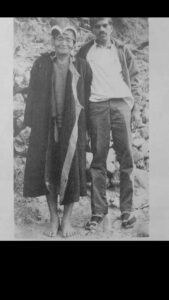 Rengiah Murugan when he was researching north-east tribes

people after locking up the house. When  we went on the rescue boats inside, we found that the rare books and documents in the cupboard and loft were all wet and stuck together. There was no point in drying them since they were beyond salvage. When the water drained, we saw that many books had been damaged and were lodged in the mud. The cleaning crew took them away since they were badly damaged. Only some 200 books could be salvaged in good condition. Some 2,000 books were lost. That loss can never be compensated for,” says Murugan.

Rengiah Murugan estimates that the equipment and things he lost was some Rs 7 lakhs but he shrugs that off saying money could buy back that. But the books and documents he lost were invaluable, he adds.

Rengiah Murugan rues that he had not digitized his collections. Since his computer was damaged in the flood, many important digital documents were also lost. “After the floods, I moved to the second floor so that my books and documents are not lost in future floods,” he says.