Aval Appadithan, in which Rajini co-starred with Kamal Haasan, did not raise too many expectations unlike today’s Rajini films. It wasn’t a grand commercial success. It was the director, C Rudraiah’s first film, and one of the two films he made in his entire career. 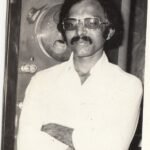 Though a debut movie, Rudriah sought to turn Tamil cinema on its head with Aval Appadithan. The movie was a stark takedown of many things including adherence to ideologies. At its end, its lead character, a committed feminist, signs off by saying feminism doesn’t make one happy.

Rudraiah continued in his lonesome endeavour with fewer and fewer people to support him over the years. If only Rajini had stood by him, he may have succeeded to some extent. He may not have been able to overturn Tamil cinema but would have helped to rein it in and root it in reality more. But the superstar didn’t.

Rudraiah, a lover of cinema, rarely watched Tamil films. He lost interest while watching half-way through. In his 67 years of existence, he made one other film, Gramathu Adhyayam. He produced the two films himself. His production company, Kumar Arts, was unlike any other company. Writer Vannanilavan says Rudraiah ran it like a commune in which people would work together and eat together. The technicians did not discuss salary terms with him; they took money from him when they needed some, adds Vannanilavan who wrote the screenplay relating to the childhood of Aval Appadithan’s lead character, Manju.

Rudraiah’s second film was released in 1980. Through most of the rest of 34 years he lived, Rudraiah tried to make a film. But circumstances never favoured him. It would seem Tamil cinema did not want too much of reality.

Born in Athoor, Salem, Rudraiah, who studied in the film institute, was taken in by the French New Wave of the 1970s. His screenplay did not have conventional elements. Only when he named his second film as an Episode in Village that many released that his first film was actually an urban film. The first film had big stars while the second had largely fresh faces. But both films talked about the plight of women. If Manju was the city’s representative, Bhavani was small town.

Many Tamil films have the heroine in love with one man and marrying someone else. From Nenjil Oru Aalayam through Mouna Ragam and Andha Ezhu Natkal, there have been many. In Oru Gramathu Adhyayam, the husband loves Bhavani with a tight embrace even as the love of her life comes back into her life. Caught between the two, she is unable to choose. Eventually, she doesn’t break barriers and stays with her husband. But what is remarkable is how Rudraiah tells the story.

What facilitates Bhavani is a ruse that Rudraiah adopts. He has the village folk drama (koothu) trainer who has a soft corner for Bhavani kill her love. Rudraiah is apparently telling viewers that such convenient things can happen only in films but, in real life, people will have to suffer their choices.
High quality performers may have helped Gramathu Adhyayam leave a mark. Today, Rudraiah is known only for Aval Appadithan. Yet, there are enough aspects in Gramathu that carry his stamp. The film moves swiftly through visuals. Dialogue is sparse but powerful.

Rudraiah’s friend and filmmaker Hariharan says Rudraiah was a big fan of French director Godard. He did not want to make films with conventional openings and ends. Though he wanted to change Tamil cinema, he did not change at all over the years. Rudraiah made several attempts to make films involving Kamal and Rajini again but he didn’t succeed. Rajini who took no remuneration for Aval Appadithan apparently told him rather firmly that Rudraiah should not approach him with proposals for making arty movies.

Kamal did try to help Rudraiah. He wanted Rudraiah to produce a film that would be directed by Balu Mahendra. But Rudraiah wanted to direct it himself.

Towards the end of the 1980s, Rudraiah decided he would direct movies produced by others. He wrote a screenplay based on Vannanilavan’s novel, Kadalpurathil. Archana was slated to play a lead role. But the producer made it a Television movie after a week of filming with another director, says director Arunmozhi who worked in both of Rudriah’s movies.

Amaran film director K Rajeswar, who helped in the screenplay of Aval, tried to make a movie with Rudraiah directing. The film was supposed to be based on the Romeo-Juliet love story with Rajeswar’s son in the lead role. But this project was shelved, too.

A Leftist and a humanist, Rudraiah was out-of-sync with the commercial aspect of filmmaking. He did not know how to play the game, maneuver through the networks, and navigate the politics. The angularities in his personality didn’t help, either. But, as a director, his vision, knowledge of cinema, and his craft were never in doubt.