Professor and folklore scholar A Sivasubramanian has recently posted a picture as his WhatsApp status. It is a lamppost at Subramanya Swamy temple at Valliyoor but what makes this lamppost intriguing is that it was erected to celebrate the coronation of King Edward VII and Queen Alexandra on Jan. 1, 1903. The pillar terms Edward VII as Emperor of India.

To the surprised souls, Sivasubramanian says it is not a sporadic structure but one of many across southern Tamil Nadu praising their colonial masters for various deeds. Say the coronation of George VI who held a Delhi Durbar in 1911, the only British King to do so, or the victory of the British in World War I, the Majesty’s subordinates in this part of this country were eager to celebrate. When the Northern brethren were busy making bombs to kill the Viceroy Lord Hardinge as he was shifting the capital from then Calcutta to Delhi in 1913 following the orders of George V in 1911, the southern counterparts were busy building clock towers or arches to mark the coronation of King George V during 1912 and 13. 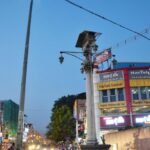 It was not the treatment the East India Company accorded in this region when they switched their initial plans of trading to invading after the death of Mughal emperor Aurangazeb in 1707. While the British and French were busy brewing one Carnatic War after another meddling in the succession issues of Hyderabad and Carnatic, the Poligar King Puli Thevar revolted in 1757 marking the first sign of agitation against the colonial interests down south.

When the Indian Rebellion broke out in 1857, peace prevailed in the south. While the Bengal Army single-handedly contributed to the First War of Independence, the British used their Madras and Bombay Armies to quell the rebellion.

There were a series of revolts among the Poligars namely Kattabommu and later in the Sivaganga region by the Marudhu brothers and their queen Velunachi. But by 1790, the East India Company had established  its stronghold in South India with a firm grip. Fall of Tipu on May 4, 1799, was the final nail on the coffin.

It will be interesting to note when the Indian Rebellion broke out in 1857, peace prevailed in the south. While the Bengal Army single-handedly contributed to the First War of Independence, the British used their Madras and Bombay Armies to quell the rebellion. Bengal, Bombay and Madras presidencies had their respective armies. Strangely enough, the Vellore Mutiny in 1806 was the last mutiny to be reported in the Madras Army ever since it was raised in 1757. It was better behaved compared to the Bombay Army while the Bengal Army was notorious for its mutinies and was largely disbanded after the revolt in 1857.

Why did the initial revolt against the British fizzle out so soon in the region? What made people of this part such loyal subordinates busy constructing arches and memorial halls or pillars for their colonial masters? Was there a kind of Stockholm Syndrome, the admiration of their captors, among the people of the region?

Professor A Sivasubramanian adds his perspective behind these questions.

Q: How do you see this gesture of building a lamppost for the coronation and maintaining it?
A: This is not the only one. There are many such structures. The schools named as Coronation Schools in this part of the region or the ones constructed by Mutts like Thiruvavaduthurai and Thirupananthal were to mark the coronation of King George V in 1911. There is another structure at Kalakkad for this. An arch near Tenkasi Railway station was dismantled recently. There was an urge among the people, especially the business community to express their loyalty to rulers. It was a sign to show the rulers and to remain in their good books. Prof and Folklore Scholar
A Sivasubramanian

Q: In your book, Ash Kolaiyum Indhiya Puratchi Iyakkamum, you have mentioned the memorial constructed for Collector Ash after his assassination. Could that be termed on these same lines?
A: It was actually to show the remorse of killing the collector. Rao Bahadur Cruz Fernandes was the man behind building a small memorial hall in Beach Road of Tuticorin. Not all agreed with the ways of Vanchinathan who wanted to avenge the coronation of King George V as emperor of India. The hall was constructed around 1912 – 13 after the assassination of Ash at Maniachi station in 1911.

Q: Why did the disposition to colonial rulers change to this extent?
A: The brutality with which the British crushed the Vellore Mutiny and subsequent court-martials proved that it was futile to fight an organized enemy like the British East India Company. Exile was one punishment because it is more cruel than death since we don’t know what happened to someone exiled in those days. One of my ancestors working for Kattabommu was exiled and never heard of again.

Q: How did this loyalty to the Company or British regime develop in the state?
A: After initial revolt and skirmishes, the company came to be known as Kumbini and earned its notorious reputation. The same people, who opposed Kumbini initially, started naming their kids as Kumbini Rasa. Unlike the Bengal Army, the Madras Army after the Vellore Mutiny consisted of all people including the scheduled communities like Parayas. Vanniyars from Northern Tamil Nadu were a large chunk of the army.

You will be surprised to know this short folk song was once popular on the Vellore side.
பேபி சரோஜா வாருக்கு (WAR) போறேன்
கம்பெனி ரோட்டினிலே கும்பினி சைக்கிளிலே
காத்தாய் பறக்கிறேன்.
(Baby Saroja, I am going to war)
On the company road, riding the company cycle
I am flying like air)
When the first World War broke out, a sizable population of soldiers of the Madras Army which went to Europe theatres was from Thiruvannamalai and Arcot region.

Q: With relative peace and the establishment of British infrastructure including schools and hospitals along with factories, could it be possible to say people in the region felt that the rule was uplifting them socially?
A: It could be but it is far-fetched. We need thorough studies and research to arrive at that conclusion.