Among those who sit in the front row of the Tamil Nadu Assembly are four DMK ministers who crossed over from the AIADMK. HR & CE minister PK Sekar Babu is one. A former loyalist of former chief minister Jayalalithaa who presided over his wedding, Sekar Babu grew in the ranks of that party, became a minister and eventually fell out of her favour, too. Elected on a DMK ticket this time, he was made the minister in-charge of temples controlled by the state government in Tamil Nadu. 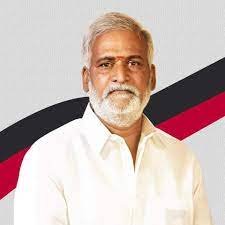 Eyebrows were raised when he joined the DMK. He had fiercely taken on the DMK in the Assembly when he was in the AIADMK. Moreover, he was a staunch Hindu, devoted to various gods and goddesses and was an avid temple-goer. Though there are believers in the DMK, they don’t make their faith publicly known or publicized, barring finance minister PT Rajan. When DMK came to power this year, Sekar Babu, the ardent bhakt, was made HR & CE minister.

Sekar Babu set the tone for his functioning when fire broke out on the premises of the Mandaikadu Bhagavathy Amman temple in Kanniyakumari district. In the past, local HR & CE officials would have handled the problem. But Sekar Babu, the minister, rushed to the spot and set about his task as a believer and devotee of goddess Bhagavathy. Namboodiri astrologers from Kerala were brought to intuit on why the incident happened. Sekar Babu continues to be on the job and frequently visits the Mandaikadu temple to firefight.

The choice of the temple at Mandaikadu may sound like divine intervention for Sekar Babu and for the DMK. It was here that communal riots broke out in the 1980s – among the first ever such incident in the state of Tamil Nadu. Soon after the riots, Hindutva organizations became strong in the district making Kanniyakumari a potential springboard for the BJP’s growth in the state. Today, the BJP is a key player in Kanniyakumari and gets its leaders elected from there for Lok Sabha and the Assembly including in the current one.

Sekar Babu’s public image and out-of-the-closet devotion to temples and Hindu gods and goddesses run contrary to the DMK’s image. With his active interventions in temples, Sekar Babu has become popular among devout Hindus who may well be hostile to the DMK.

The DMK leadership seems to have given a mandate to Sekar Babu as part of a careful strategy. In the past, the party’s efforts to dispel the notion that it is anti-Hindu were not very successful. But Babu has so far succeeded where those efforts had failed.

Temple-loving Sekar Babu helps the DMK block BJP campaigns to create a Hindu vote on top of the issue of temple maintenance. But, in parallel with bolstering temple upkeep, maintenance and reclaiming property, the DMK recently appointed two non-brahmin priests to temples built as per Vedic-Agamic traditions and administered by the state government.

The DMK’s strategy is therefore two-pronged. It wants to reinforce its critique of the BJP brand of Hinduism as brahminical so the saffron party continues to be seen as an outsider to Tamil Nadu politics while taking up temple work. This could preempt the BJP’s attempt to create a substantial Hindu votebank in the state, which it has been unable to do in Tamil Nadu. Even in Kerala, the BJP has grown based on a Hindu votebank it has engineered by taking up issues like Sabarimala and minority dominance.

Tamils may be religious but they do not see the BJP as representing their religion. And the DMK will want them to continue thinking that way. But at the same time, the DMK doesn’t want to be seen as anti-Hindu.

Tamils may be religious but they do not see the BJP as representing their religion. And the DMK will want them to continue thinking that way. But at the same time, the DMK doesn’t want to be seen as anti-Hindu.

Sekar Babu was not keen on his portfolio initially. But like a dedicated party worker, he took up the job of temple upkeep with enthusiasm. Lifelong DMK folks may hesitate to go to temples frequently, worship there, and then maintain them. Not Sekar Babu.

In the past, the HR & CE ministry would rarely feature in news. Now it is a news-bearing ministry.

Sekar Babu’s periodic temple visits and efforts to reclaim encroached temple lands have often hit the headlines of local media. In the past such efforts would be taken up in court halls. Today, the minister himself is taking direct action on the field, leaving encroachers and rent defaulters rattled. After reclaiming temple property, he proudly erects signboards saying the property belongs to temple to discourage future encroachers. In the few months the DMK regime has been in power, he has reclaimed many acres of temple land.