In praise of Chennai in 5th century AD

In tracing the antiquity of the Chennai region subsequent to the second century A.D., we have to rely on the works of the early Vaishnavite Aazhwars called the Mudhal Alvars, who have been ascribed to the 5th and 6th centuries A.D. A View of Tirunirmalai temple located at the hill.

In this verse, the Alvar mentions Thirunirmalai along with Vengadam, Thirukikottiyur, and Thirumaliruncholai – all renowned places for Vaishnavites. Bhutath Alvar, said to belong to 5th century, in his second Thiruvandhadhi refers to Tirunirmalai thus:”

“The Supreme Lord with long magnificent arms, and resembling the resplendent blue ocean, abides from time immemorial in Thiruvarangam and Thirukottiyur. He also resides for long at Venkatam, and in beautiful Tirunirmalai set amidst lovely gardens. Unlike the short-lived Vibhava avataras, the Lord forever present in these Divya Desas for conferring His grace on us. In Tirunirmalai, the Lord appears in rare, four states – reclining, seated, standing and strident”.

Pey Alvar, who is assigned to the fifth and sixth centuries AD by historians like K A Nilakanta Sastri, gives a scenographic detail of Thiruvallikeni (Triplicane) in one of his verses in the Third Thiruvadanthi of ‘Naalaayiradivya Prabandham’, the import of which is as follows: “The white waves of the Bay of Bengal which hit and run the shore bring with them white pearls and red corals which get themselves deposited on the shore and these gems shed lights which illuminate the entire town of Thiruvallikeni in the evenings”.

The Alvar obviously has in his mind the nearness of Thiruvallikeni to the sea when he sang the verse Thiruvallikeni, which means a sacred lily tank. The sthala puranam of the temple informs that the place was also known as Kairavini, the exact Sanskrit equivalent of Thiru Allikeni. 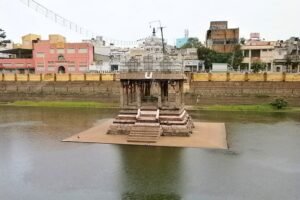 A Sanskrit work of the 17th century, Viswagunadarsha, by one Venkatadhvari, also calls Triplicane, Kairavini. That tank, evidently the one situated opposite to the Sri Parthasarathy Swami temple, seems to have been held in great reverence, as it is even today. The Guruparamparai, a work dealing with the lives of the Vaishnavite Alvars and the Acharyas informs how the father of the great Vaishnava Acharya Ramanuja was not endowed with a child for a long time and how Thirukachhi Nambi advised him to have a bath in the holy tank at Thiruvallikeni and a darshan of the Lord at that place. He is said to have acted accordingly and was blessed with a child who grew on to be Ramanujar.

Thirumangai Alvar, who lived in the 8th century A.D., also clubs these two names in his epithet ‘Maammayilai Mavallikaeniyaan (Periya Thirumozhi II, Ten, III Thirumozhi). The bringing together of the two places was perhaps because Thiruvallikeni was considered a suburb of Mayilapur.

Thirumangai Alvar’s (generally ascribed to 8th century) famous paasurams on Thiruvallikeni provide useful information of a general character about the places, temples, the shrines, and its inhabitants. “His famous paasurams on Thiruvallikeni contain ten beautiful verses, nine of which end as Thiruvallikeni Kandene, (I have seen Thiruvallikeni). One important feature of Thirumangai Alvar’s verses is that he has mentioned all the deities of the Parthsarathy Swami temple of Thiruvallikeni in his time (8th century AD). Thus, he devotes five of his verses in praise of the main deity, Parthasarathy Swami. His second verse is in praise of Sri Ranganatha, for whom there is a separate shrine in the temple. In his second verse, Thirumangai Alvar describes Mayilai -Thiruvallikeni as a place possessing storied buildings and inhabited by women of exemplary character (oppillaa maadhargal vaazhum maadamaamayilai; ஒப்பில்லா மாதர்கள் வாழும் மாடமாமயிலை). His seventh verse is in praise of Sri Rama, for whom also there is a separate shrine. His eighth verse is devoted to Thelliasingar (Lord Narasimha) for whom there is a shrine on the western side of the temple. His ninth verse is in praise of Sri Varadharaja swami, to whom there is a shrine on the southern side of the main shrine.

Thus, it is in Thirumangai’s verses that we get for the first time a comprehensive account of almost all the deities inside the Thiruvallikeni temple. The most important piece of information is contained in the last verse, which eulogises one Thennan Tondaiyarkon for having built high buildings, rampart walls, gardens, pavilions etc., at Thiruvallikeni. Tondaiyar is a Tamil word used to denote the Pallavas, during whose period Thirumangai Alvar lived. This Pallava king might have been Nandivarman Pallavamalla (731-795 CE) or his son Dantivarman, both of whom were contemporaries of Thirumangai Alvar. It was not that the temple itself came up during his time as we find that Pey Alvar and Thirumazhisai Alvar, who preceded Thirumangai, had already sung about the temple at Thiruvallikeni. It should be taken as a reference to the layout of the town, and embellishments done to the temple by the eighth century.

Thirumangai Alvar has ten separate verses on Thirunirmalai in Periya Thirumozhi. Thirumangai Alvar’s paasurams on Thiruvallikeni and Tirunirmalai must be studied more closely, for they contain descriptions of the places, the temples, the various shrines inside them and also about the people residing there, says historian KV Raman. The Alvar has ten separate verses on the Lord of Tirunirmalai. All the verses except the last one, end with ‘Mamalaiyavadu Nirmalaye’ மாமலையாவது நீர்மலையே (Periya Thirumozhi, II. 4). He also refers to Tirunirmalai in Periya Thirumozhi , VI. 9, and verse 4, VII. 1,Verse 7; VIII. 2, verse 3, X.1, verse 3, Thirunadundakam, verse 18., Siria Thirumadal, verse 73, Periya Thirumadal verse 130. After detailing the greatness of Vishnu in general, he mentions the name of the deity as Nirar Peran. An inscription in the temple on the hill, dated 4th year of Kulottunga Chola III (1178-1216 CE), mentions Lord Nirvannan. Another inscription of the third year of the same king Kulottunga Chola III (1178-1216 CE) mentions the shrine of Singaperumal.

Thirumangai Alwar also refers to a big grove in Tirunirmalai, (வாசமணி வண்டரை பைம்புறவில் மாமலயாவது நீர்மலையே), a fact also alluded to by Bhutath Alvar. Of the two temples at Tirunirmalai, the one of Ranganatha on the hill is the older one and that is the one that has been sung about by the Alvars. The other temple down the hill is of later construction.

Historian K V Raman points out that the references by the Alvars to various places in Chennai, visited by them, proves the antiquity of Chennai, and the existence of the places at least from 5th CE. (Tomorrow Tevaram references to ancient Chennai)