PH Pandian formula will help save EPS govt: Dinakaran group MLAs have to use surprise weapon

Most people think that the Edappadi Palaniswami government will fall once the 18 AIADMK MLAs (T T V Dinakaran supporters) win their case against the disqualification order issued by the Speaker in 2017. However, the AIADMK government has the P H Pandian formula up its sleeve to continue to be in power at least for some time.

Justice M Sathyanarayanan appointed on the instructions of the Supreme Court is expected to deliver his judgment in a day or two in the disqualification case. He was appointed as the third judge after the Madras High Court gave a split verdict in the case, necessitating the appointment of the third umpire to overcome the deadlock. 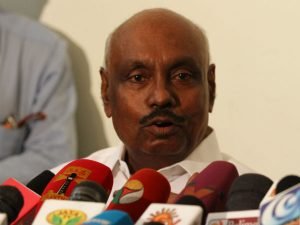 In the event of the disqualification order being quashed by the third judge, the 18 petitioners will have their membership of the Assembly restored. These 18 MLAs could be supported by three other AIADMK MLAs — Kallakurichi MLA A Prabhu, Vriddhachalam MLA VT Kalaiselvan and Aranthangi MLA E. Rathinasabapathy, besides Karunas, Thaniyarasu and Tamimum Ansari who belong to different parties but contested and won on the AIADMK symbol of two leaves and therefore technically are AIADMK MLAs too. And if you add Dinakaran MLA, there could be 25 MLAs voting against the Edappadi Palaniswami government.

These 25 and the 97 of the DMK-led alliance (DMK 88, Congress 8 and IUML 1) can carry a total of 122 in the 232 strong Assembly (the total strength is 234 but Tiruvarur and Tiruparankundram seats are vacant).

As against this total, the ruling AIADMK will have only 109 MLAs voting for it (Speaker P Dhanapal cannot  vote unless there is a tie.

Therefore, it appears that the AIADMK government with 109 would lose out to a combined opposition vote of 122. However, the ground reality is otherwise.

In the event of the 18 MLAs winning the disqualification case, the AIADMK government will work overtime to get them disqualified all over again.

So, how does the PH Pandian formula work? Pandian was the Speaker of the undivided AIADMK in December 1987 but the party split into several groups led by V N Janaki, widow of late chief minister MGR, J Jayalalithaa who headed the rival Jayalalithaa faction of the AIADMK, and another group led by V R Nedunchezhiyan.

The dominant Janaki group with over 90 MLAs elected Janaki as its legislature party leader, and she was sworn in as chief minister and had to take the confidence vote in the Assembly.

The Janaki government was not expected to win the confidence vote as the Jayalalilthaa group had 33 MLAs. However, even before they could vote, they were disqualified by the Pandian method of recording the votes of the MLAs in the House. Pandian adopted the unique stand of having block-wise voting. When MLAs of a block are asked to stand to indicate if they would vote for the government, MLAs belonging to the group of 24 would not stand, and would wait for vote by the nayes next. But before the Speaker asks the nayes to stand up, the government whip who belongs to the Edappadi group would seek to disqualify members of this 18 plus 6 – 24-member group — for not standing up and voting for the government. In effect, even before they can vote against the government, they would be disqualified block by block. By this method, the government can prevent the votes of the 18 MLAs from being counted. At the end of such counting, the Edappadi group would be declared to have won with 109 votes for and 97 against.

PH Pandian is now in charge of the legal wing of the party, so it is only to be expected that the Pandian line would be followed by the ruling party.

This would prevent the fall of the government for at least six months, enabling party managers to engineer more support for the EPS group. It is another matter that the Governor dismissed the Janaki government on January 30, 1988, citing the breakdown of law and order and rule as per the Constitution in the Assembly but the deed was done. The seats would be declared vacant, and by-elections would have to be held within a few months in 26 constituencies. The ruling AIADMK would then have to win at least eight of the 26 by-elections to remain in power. The rebel MLAs will have to lie low, and strike at the opportune moment, using surprise as their weapon, and not bravado.