Tamils and Malayalees: Let’s talk about the stereotypes

It is true that Malayalees refer to Tamils as Pandis and Annachis. But that’s not derogatory, says Vanamamalai, secretary of Thiruvananthapuram Tamil Writers Association. Vanamamalai says he is the right person to make that judgment. Originally from Tirunelveli, he has lived for nearly 44 years in the Kerala state capital.

“Pandi indicates someone who doesn’t take bath and is dirty,” says S Jayapal, a resident of Thisayanvilai.

S Jayapal, a resident of Thisayanvilai, refutes Vanamamalai’s contention. “Pandi indicates someone who doesn’t take bath and is dirty,” he says, mouthing the familiar Tamil refrain about Malayalees being murderers, a rhyming description in Tamil.

Last year, Murugan, an accident victim originally from Tirunelveli, died in Kerala because hospitals there refused to offer him treatment. While this incident created ripples in Tamil Nadu, Kerala Chief Minister Pinarayi Vijayan expressed his regret and stipulated that the Kerala government will take up all treatment expenses related to accidents for the period of 48 hours after the accident.

Recently, even as floods ravaged Kerala and offers of help were pouring from Tamil Nadu, the Internet featured slanging matches between the youth of the two states. Apparently, a Tamil youth’s marriage proposal to a Kerala girl was turned down because he was Tamil, and he put out a video about this. A response video showed women from Kerala taking it out on Tamil youth. With the danger of the war of words turning real arising, Kerala police intervened and campaigned against such exchanges. Taking the cue, some put out videos that advocated good neighbourliness and tolerance. 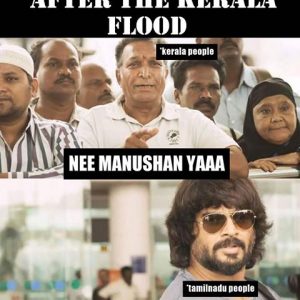 The interaction between Tamils and Malayalees has historically been a case of so-near-yet-so-apart. The two languages are probably closest to each other among major Indian tongues and there has always been much give and take and migration. In the recent past, Madras was the big city for Malayalees, especially for those who lived in the British Madras presidency. It was where aspirational Malayalees moved to pursue a better life. As the capital of the British province, Madras gave birth to the Dravidian movement as a pan-South Indian idea. Among the founders of the Justice Party was T M Nair, a Malayalee.

In the early days after Independence, Kerala had the image of being a riverine, lush green land where esoteric practices like tantra and black magic thrived. Malayalees were the poor cousins for many Tamils. But over the years, not least due to pioneering social reforms and advancement in education, Kerala’s social indices improved. Arabian Gulf jobs boosted the quality of life in Kerala that seemed to leapfrog into becoming an advanced society without industrializing. Culturally, too, the state advanced – the 2011 Census threw up the startling statistic of how an overwhelming majority of households in Kerala had toilets whereas Tamil Nadu’s performance was an abysmal 50%, ballpark.

In a clear sign of the change in fortunes, more and more workers from Tamil Nadu have been going to Kerala for jobs periodically. Years of trade unionism and activism in that state have jacked up labour costs and employers there are more than willing to employ people from their neighbouring state. For instance, the menfolk from entire villages on Kolli Hills go to Kerala when the cropping season ends. “Malayalees are affectionate people but you have to be careful with them. If they don’t like something, they will get you into trouble,” says M Kaliarasan, a mason from Panakudi who lives in Ernakulam where he says he earns up to Rs 1,300 a day.

Along with these changes, the stereotypes have changed too. It didn’t help that Malayalees were seen to be clannish and more interested in promoting their kin at the cost of other Indians. It was a trend born out of necessity since Kerala offered few career opportunities for white collar folk and the Malayalee migrant had to give a helping hand to his qualified but under-employed ‘nattukkaran’ back home. “Malayalees are arrogant and selfish”, says M Damodaran from Rajapalayam who worked for several years in Saudi Arabia. Damodaran said Malayalees rarely took to others in Saudi.

Poet M Kasuman is disturbed by such views among younger people. “Such hate campaigns are being unleashed without considering history,” says Kasuman

Poet M Kasuman is disturbed by such views among younger people. “Such hate campaigns are being unleashed without considering history,” says Kasuman, adding that Malayalam’s roots lie firmly in Tamil. He says that many of the Sangam poets come from what is today Kerala. “Ten songs were composed in praise of each of 10 Chera kings in what is today Kerala,” he adds. He says early Tamil words continue to be used in contemporary Malayalam although today’s Tamil does not feature them.

K Anil Kumar David, a research scholar of Malayalam, says the ancient literature for both Tamil and Malayalam is Sangam.”There is language pride involved and that pride for both comes from Sangam literature”, he says, adding that the term Pandi only denotes people from Pandian kingdom as opposed to Chera kingdom.

Vanamamalai points at how native Tamil speakers in Kerala have access to Tamil schools and tries to refute concerns that Tamil schools are being closed. He attributes it not to any bias but to how Tamil families in Kerala want to send their children English medium schools.

One should not judge a whole people based on the mistakes of a few, says Dr R Mahadevan, a heart surgeon in Thiruvananthapuram. A successful doctor, he is often sought after by people from the southern districts of Tamil Nadu. “Tamils who come to me are very cooperative. They can be trusted with hard work,” he adds.