Sisters not welcome, says granny who has made 40 Sabarimala pilgrimages

Padmavati Patti is a Sabarimala veteran. She has made the pilgrimage some 40 times. Originally from Cumbum in Theni district, she is among the few female guruswamys in the state – team leaders who initiate, mentor and guide the pilgrims – and takes women pilgrims along with her. Yet, Padmavati Patti is not happy with the Supreme Court judgment. “I am bound by our sacred traditions, and I state categorically that women between 15 to 50 years of age should not be permitted to enter the temple,” says the woman guruswamy.

And she will not facilitate the implementation of the judgment by having women who have attained puberty and not had menopause come with her to the temple. “ I will never become a catalyst for the acts that are against the deity and his sanctity. This judgment has to be reviewed and revised”, she says.

“Permitting women of all ages to visit the Ayyappa temple amounts to disrespecting the celibate deity. How can menstruating girls and young women observe the strict austerities that are the pre-requisite for the pilgrimage? These need to be observed for 41 days continuously, and that may not be possible at all for them. Only women above 50 may have the required maturity and only such people can undertake this tough mountainous journey”, she says.

“I will never become a catalyst for the acts that are against the deity and his sanctity. This judgment has to be reviewed and revised”, Padmavathi Patti says.

Padmavati patti recalls her initiation into Sabarimala devotion. “My second brother, who was 23 then, was suffering from some serious ailments. Kameswaran Iyer, a senior gurusamy from Kerala, advised him then to visit Sabarimala and pray to Lord Ayyappa. My brother did that with faith and got fully cured of his sickness in the same year. We are Vaishnavites, and we feel that it was only the lord who revealed himself to us through that gurusamy. Things are just going fine for us ever since we started worshipping Ayyappa, and so we are continuing with our pilgrimage and worship, with a lot of conviction.

From then on, my brother was visiting the hill temple every year for 22 years. I used to help him out in his worship rituals and, soon, I too developed a deep interest in worshipping the lord. I crossed the menstrual period when I was 38, and then, I too started going on Sabarimala pilgrimage and worshipping Ayyappa,” says Padmavati who moved to Pallikaranai in Chennai in 1976. 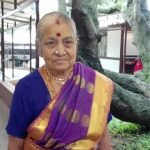 “Starting 1977, I am going on annual pilgrimage to Sabarimala mountains, after observing strict austerities for 41 days continuously.  I have also worshipped in many other Kerala temples, visiting them as part of my Sabarimala pilgrimage. When young, I used to go by periyapadhai, the long route running through tough mountainous terrain. But in recent times we have started going by train from Chennai, climbing the mountain ranges from Pampa, returning on foot to the same place, and taking the train from there back home. Twenty swamis, austerities-observing Ayyappa devotees, come with me. I would take women only if they were above 50,” she adds.

Padmavati underwent heart surgery five years ago, and on medical advice I am doing the pilgrimage now by riding a palanquin.  “The precincts of the Ayyappa temple, managed by the Travancore Devaswom board could not be opened this year, due to unprecedented rains in Kerala. So, I visited and offered worship at the Chennai Raja Annamalaipuram Ayyappa temple” recalls Padmavati patti.