Will Tamil Nadu Governor refer the plea for release of Rajiv case convicts to the Centre? That is the most vital question as the Supreme Court on September 6, 2018, has asked the Tamil Nadu Governor  to consider the mercy plea of Perarivalan, a convict in the 1991 Rajiv Gandhi assassination case. This appears to facilitate an immediate release order but the prison doors may not open soon for the convicts. Though the Tamil Nadu government appears to stand by the decision of the Jayalalithaa government in 2014 to release the seven convicts, subsequently opposed by the BJP-led NDA government and the Supreme Court, a decision on the release has to be taken first by the Tamil Nadu cabinet, which decision will be sent to governor Banwarilal Purohit. In the present scheme of things with a virtual de facto rule of the State by the BJP, the Governor is likely to refer to the Union Home Ministry for guidance and legal opinion.

Will the Union Home Ministry and the Law Ministry stick to their stand, reiterated on August 10 to the Supreme Court, that remission of their sentence will set a “dangerous precedent” and have “international ramifications”? It said the case involved the assassination of a former Prime Minister in a brutal manner in pursuance of a “diabolical” plot carefully conceived and executed by a foreign terrorist organisation. 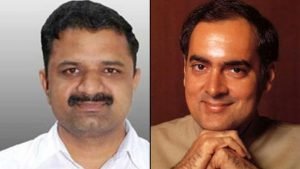 In the event of the Home and Law ministries continuing to hold this position, the TN Governor  may have to await clearance from the Centre which may not come soon.

The Governor has a major problem here, whether to go by the legal opinion of the Union Law ministry and the Home Ministry — the governor after all is an agent of the Centre — or should he go by the cabinet decision in the State, especially since he should generally abide by the cabinet decision. Popular sentiment in Tamil Nadu, as represented by the major parties, the AIADMK and the DMK, and others like the MDMK, DMDK, VCK, and fringe groups led by P Nedumaran and Seeman (Naam Tamizhar Katchi) will be in favour of immediate release. Several parties could also considerable pressure on the State government to secure an early release. DMK president M K Stalin has already called for a cabinet meeting to adopt a resolution and send to the Governor urging immediate release. Parties like the MDMK and PMK have followed suit.

Tamil Nadu ministers, however, have sounded cautious on the issue though the Supreme Court has said the State can consider the plea. Union minister Pon Radhakrishnan, who hails from Tamil Nadu, has said that legal issues would have to be studied, indicating that the BJP is not keen on release of the convicts.

The Congress has taken the stand that the law can take its own course, quoting its national president Ragul Gandhi that the Congress does not seek to punish those held in the case.

TNCC president S Thirunavukkarasar said the legal authorities were free to take their own decision, and that the TNCC will not seek punishment of the convicts.

Meanwhile, the State government would be caught in a bind between the Centre that does not want any leniency towards terrorism, and the pressure from TN parties to release the convicts at the earliest.

Confusion also prevails whether the Supreme Court, on September 6, asked the Tamil Nadu Governor to take a decision on the release of just one of the convicts, Perarivalan, or all seven. According to a national news agency, the SC has asked the State governor to decide on the mercy petition of Perarivalan alone.

The State government therefore seeks more time to go into the fine print of the SC order.