The image of my grandmother is strikingly alive and fresh in my mind. Sporting an affable, paan-stained smile and her wavy hair tied in a careless knot, my grandmother was a vivacious village woman, born decades before Independence in the interior Dindigul district of southern Tamil Nadu.

The first thing I remember while thinking of her are the heavy, gold earrings, known as thandatti in Tamil, that used to dangle delicately on her elongated earlobes, almost touching her shoulders, when she walked with her characteristic gait and whenever she talked in her sing-song folk Tamil.

“Pray to me with these when I’m gone,” she had said, handing me these ornaments, while breathing her last. That was a decade ago in the winter of 2012 — she was 99.

Each of these ear pieces weighing about 30 grams remained an indispensable part of her identity. Gifted to her by her elder brother as part of the dowry when she was married to my grandfather when barely 16, these thandattis are well over 80 years old.

The uniqueness of these earrings is that they are geometrical in shape, with interlocking squares and triangles, almost looking like a pyramid and the screw is usually shaped like a ball or sphere, that locks the ornament onto the stretched-out earlobe

“The year I got married, the mango season gave us a bounty from the 3-acre farm that my brother owned. As the talks were finalized, he went all the way to Madurai in a bullock cart to buy utensils, jewellery and clothes as gifts for me. And among those were these thandattis, a precious present from him,” my grandmother used to recall often. “Back then, a pavan of gold (approximately 8 grams) was about Rs.150.”

Multiple designs and shapes
The uniqueness of these earrings is that they are geometrical in shape, with interlocking squares and triangles, almost looking like a pyramid and the screw is usually shaped like a ball or sphere, that locks the ornament onto the stretched-out earlobe. Some of these pieces may also carry the initials of the woman, engraved on them. The pair that I inherited from my grandmother measure about 2.5 inches in length and width. The upper part of the earring is a semi-circular crescent that’s attached to the heavy bottom section through a hinge. The crescent opens or gapes like a crocodile’s mouth which is latched on to the earlobe with a screw on the other end. There are various shapes and designs to the earring depending on which the name changes. For instance, the one shaped like a serpent is known as Nagavadam or Pampadam and multiple rings worn together are known as Chavudi.

Until a decade ago, one could see many elderly women in the southern districts of Tamil Nadu, wearing these earrings, made of gold, filled with lacquer. Along with half a dozen other ornaments such as poodi, koppu and onnappathattu, that are worn on the ear, the thandatti completed the look.

Mathisport: Why pearls are stunningly symmetrical, perfectly round 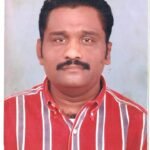 Fashion as philosophy
“References to the thandatti have been found in Sangam Literature, indicating that these ornaments were worn by women in the erstwhile Pandya country (a geographical region which today corresponds to roughly about 12 districts around Madurai). There are also references to men wearing these ornaments on long earlobes,” says anthropologist, Sundaravanthiya Thevan, author of Piramalai Kallar Vazhvum Varalarum.

The thandatti is not something that can be slipped on and off. To be able to wear a thandatti one had to undergo a long process of what was called ‘growing the ears’, Mr Thevan says. “The process of piercing and stretching the ears, was traditionally done by the Kuravars. They would pierce the ears of babies just a few weeks old; after which the lobe was lengthened gradually by adding weights. Over the years, by the time the girls reached marriageable age, the ear lobes would have become large enough to wear a thandatti,” he explains.

The history behind the practice goes back to 100 CE or even before, when Sramanam (Jainism) was prevalent in ancient Tamil 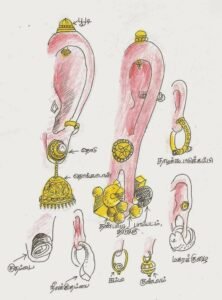 Nadu. “Stretched-out earlobes are symbolic of Jainism, which grew as a strong philosophy in contrast to the Vedic philosophy. Ideals of Jainism were embraced by many Tamil subaltern communities,” says R. Muthunagu, author of the historical fiction Sulunthee. “One could see the statues of Jain Thirthankaras with elongated earlobes. Even the sculptures and paintings of kings and deities are shown sporting long ears.”

Written records
Mr. Muthunagu further states that there are references to the practice found in palm leaf documents of ‘Kallar country council’ meetings, that used to levy fines on people who abstained from growing their ears. “During the Nayak period, the practice was used to distinguish Tamil communities from the Telugu and Kannada speakers who migrated from the Deccan. The Nayak government ordered Kuravars with the task of elongating the earlobes and that’s how they became the go-to people for the practice,” he adds. 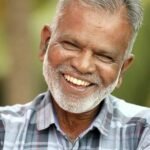 British records such as Castes and Tribes of Southern India by Edgar Thurston and The Madura Country Manual by J.H. Nelson, record this practice among a wide range of communities such as the Nagarathars, Vellalars, Kallars, Maravars, Agamudaiyars, Nadars, Pallars, Parayars and Chettiyars.  “Even in the region of Chola country, the practice was in existence, as you can see Chola bronze sculptures including that of Raja Raja Chola, depicting dangling earlobes. In some old black-and-white family portraits in Nagarathar households, one can see women wearing thandatti,” says Mr. Thevan.

Historians agree that what started as a symbol of philosophy later became associated with aesthetics. Those who didn’t grow their ears were commonly teased in the countryside as ‘mooli’ in Tamil, meaning ‘lacking ears’ or ‘less beautiful’.

However, the practice and the ornament, have slipped into oblivion and the few women we see today wearing thandatti are probably the last group of people who underwent the process of ‘growing their ears’.