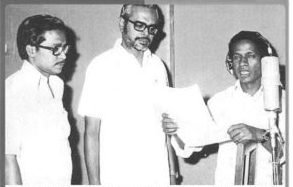 Panchu Arunachalam with Ilayaraja and Selvaraj at recording of Annakili

Ilayaraja is regarded as the king of re-recording. His background score lends depth, mobility and an emotional bond with the viewer, transcending even an ordinary scene to epic proportions.

Bharatiraja would say he deliberately left gaps for Ilayaraja’s background score to fill in and transport the scene to an elevated level. For example, he had taken some shots of Sathyaraj and Rekha for the film Kadaloara Kavidhaigal to be used as fillers but Ilayaraja put them together for the Das Das Nee Ippo Pass Pass song which he composed almost instantaneously, using those scenes in the background. The song went on to be a hit, though Bharatiraja had never planned a song at that point in the film.

Ace film-maker Balu Mahendra was one of the first to acknowledge Ilayaraja’s contribution to his films, mainly with the excellent re-recording that was soulful. IR’s re-recording was particularly exceptional in the film Moonram Pirai, setting the mood for the film and highlighting the various emotions that gripped the film. Balu Mahendra depended heavily on Ilayaraja’s background scores at crucial moments in the film rather than drown viewers with reels of dialogue.

Balu Mahendra went on to say that he would stop making films if Ilayaraja stopped composing music. Such was the love and respect the cinematographer-cum-director had for Ilayaraja’s immense contribution in the form of music for a film.

Soon to follow in his footsteps was director Bala, who too said he depended largely on Ilayaraja’s background score to create the mood and depth of his films. He found Ilayaraja’s re-recording created a kind of emotional chord which went beyond what he shot.

Maniratnam’s success in Nayagan was largely due to Ilayaraja’s music, especially the re-recording. A theme song sung by Kamal Haasan formed a thread throughout the movie, sometimes in voice format or in instrumental music, to elevate the film into an emotional experience. A piece of re-recording coupled with Kamal Haasan’s silent histrionics earned applause at theatres.

Thalapathi too had some haunting moments as the song Chinnathaay Aval Thantha Raasaavae, later played on the flute as a background score, provided an emotional link between the characters played by Srividya and Rajinikanth.

A brilliant duet by K J Yesudas and S Janaki, Puthampudhu Poo Poothathoa, which did not make it to the final film, was used as a background score by Ilayaraja to give viewers a glimpse of the song ! Few were aware that it was part of a full song which was cut, obviously to reduce the length of the film.

Two key elements of Ilayaaraja’s re-recording work were speed and accuracy. Music directors from Mumbai were shocked to hear that Ilayaraja could complete the entire re-recording work for a film in a couple of days. It used to take them weeks. A leading music director who happened to see Ilayaraja at work during a re-recording session was astonished to find Ilayaraja merely viewing the scene twice, and handing over notes for all the musicians to play the background score. It was not tested with the musicians playing on the instruments. The sound and contribution of every musician was visualized by Ilayaraja and re-produced on paper ! And when they all played together, according to the notes given to them, the synchronisation was perfect. Even the musicians performing at the re-recording would be stunned at the precision and the beauty of the background score. Directors and music directors would say this was unparalleled. Music directors abroad too recognized this aspect of Ilayaraja’s work as phenomenal.

Actor-Director Prakash Raj said he was witness to Ilayaraja’s genius in background scores for his film Dhoni. After watching a scene twice, Ilayaraja merely handed out notes for each musician, and when they played together, he found it amazing not only in terms of quality but also the precision. How Ilayaraja kept track of the time Prakash Raj would not know, but Ilayaraja provided the score for a loud thud to synchronise with the closing of a locker.

K Vishwanath, too, found that Ilayaraja’s re-recording work for his famous films like Saagara Sangamam, Chippikkul Muthu etc., raised his films to epic proportions. IR’s score for these two movies, in particular, was mesmerising.

It was an Ilayaraja with such prowess who could not take up the re-recording for the film Annakili.

Producer Panchu Arunachalam’s brothers Subbu, Lakshmanan and Kittu were unanimous in their view that Ilayaraja should not be entrusted with re-recording work for the film. They said re-recording was crucial for the film. Ilayaraja didn’t have the requisite experience in re-recording, they said, and told Panchu that the work should be assigned to some other leading music director like G K Venkatesh, Ilayaraja’s brother Gangei Amaran has said later in an interview.

“Ilayaraja didn’t have the requisite experience in re-recording”, says Subbu, Lakshmanan and Kittu

It must be remembered that the brothers had earlier opposed Panchu when he wanted Ilayaraja as the film’s music director. In a rare case, Rasaiah arranged for Annakili songs to be rendered at a kalyana mandapam, with the orchestra and singers, in order to try and convince Panchu’s brothers about his ability! It was only after this performance that the brothers reluctantly agreed to let Ilayaraja do the songs for the film Annakili. Re-recording was yet another hurdle for him.

When the brothers wanted a different director for the re-recording, Panchu Arunachalam ticked them off saying that he had worked with several music directors, lyricists, producers and directors for many years. He had also the experience of assisting Kannadasan during recordings with leading music directors and singers. He said he could recognize the talent of this boy Rasaiah, and that he would one day be a famous music director. Leave the decision to me, he told his brothers and entrusted the work of re-recording to Ilayaraja. An angry Panchu finally had his way.

Thus, began Ilayaraja’s tortuous journey of re-recording for films. Why was SPB missing?

Forums › Ilayaraja, the king of re-recording, was almost kept out of the background score for Annakili