Kalaignar Statue Ready for Installing in Arivalayam : What about one again in Anna Salai? A statue of the late Kalaignar Karunanidhi is being made ready for installing at the DMK headquarters, Anna Arivalayam. But what about reinstalling his statue again, at the Anna Salai – General Patters road junction, where it stood once, is the question raised now.

A Karunanidhi statue was erected there as desired by Periyar and on behalf of the Dravidar Kazhagam, but it was vandalized by miscreants during the violence subsequent to MGR’s death. A photo of this was published in the then Indian Express, on 24.12.1987.

Karunanidhi himself published that picture in Murasoli at that time and had written a poem then, to the effect – 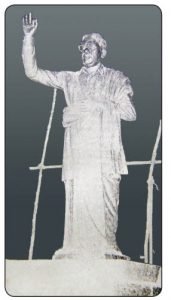 “My dear brethren, the people who instigated the act must really be happy now, but the young man didn’t actually stab me in my back, but is doing so only at my chest in front. This gives me solace, may he live long!”

Later, when the Dravidar Kazhagam made efforts to erect a new statue for him at the same place, it seemed some of Karunanidhi’s family members and party functionary were reluctant and it also looked like Karunanidhi himself was unwilling to overrule them, and hence the Dravidar Kazhagam didn’t go ahead. DK president K Veeramani now says they kept quiet because of the circumstances and expressed confidence that as his full-size bronze statue is already ready, it would be installed and unveiled soon. If this happens, the statues of Periyar, Anna, Karunanidhi, and MGR will be on Anna Salai one after the other, in the appropriate order. But no official communication has come from DMK so far agreeing to reinstallation of Karunanidhi statue at the same place.

Meanwhile, Dheenadayalan, the sculptor who designed the Anna statue at Anna Arivalayam, is carving a new statue of Karunanidhi for installing in Arivalayam. This work is being done in the Pudhuppedu village near Minjur, and the DMK president M K Stalin who recently reviewed the work in person has suggested some changes.

M K Azhagiri has already requested permission to put up a Karunanidhi statue near Aavin diary in Madurai, but it is expected that the Anna Arivalayam statue will be unveiled earlier, and very soon.

Putting up statues in Chennai is a big political game. A Kannagi statue was inaugurated in Kamarajar Salai, Chennai during DMK rule in 1968 by the then Chief Minister Annadurai, but this was removed to the museum during the Jayalalitha regime in 2001. Once Karunanidhi came back to power, it was put up again at the same place in 2006.

The statue of Shivaji Ganesan that was installed opposite the Gandhi statue on Beach Road, was unveiled in 2006 by the then CM Karunanidhi. But this was removed overnight on August 2, 2017, and was shifted to the Shivaji Ganesan Mani Mandapam(memorial) in Adayar. This was opened there again in the ADMK rule, but the name of Karunanidhi was missing in the plaque.

During the freedom struggle, a protest took place in 1927 for removing the statue of colonel James Neel on Anna Salai opposite to Spencers. It was then shifted to the Ripon building campus. When Rajaji became the state CM in 1937, he directed the statue to be moved to the museum. Though some statues put up during the British rule were removed later, a few like the Munro statue are still standing in their original locations.

The statue of Jawaharlal Nehru installed near Kathipara was moved to a nearby location for facilitating construction of the flyover there, and the Rajiv Gandhi statue near Chinnamalai was also shifted to make way for the metro rail.

Permission was obtained by a Congress functionary in 1991 for putting up the statue of Indira Gandhi on Anna Salai – Binny Road Junction; but for some reason, the statue was not put up and only a pedestal stands there now.

It is altogether a different story that many ancient idols from temples in Tamilnadu are being stolen and that the investigation on such idol-thefts is gaining momentum now.