The swiftness with which the city police arrested AIADMK MLA S Karunas and got him remanded to custody at Vellore prison has exposed the bickerings within the ruling AIADMK while the AIADMK government is looking for every opportunity to crush Dinakaran supporters and break up the rival camp.

On the face of it, the action against Karunas, the Thiruvadanai MLA, appeared to be a response to his intemperate outbursts against CM Edappadi Palaniswami, his deputy O Panneerselvam and against other communities in general. However, this is in stark contrast to the inaction over complaints filed against actor S V Shekher and BJP leader H Raja for making derogatory statements, the opposition has pointed out. 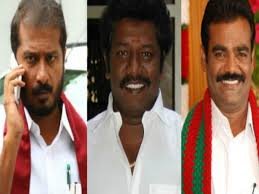 Karunas, Kangeyam legislator U. Thaniyarasu, who heads the Kongu Ilaignar Peravai and Nagapattinam MLA M. Thamimun Ansari of Manithaneya Jananayaga Katchi have been identified as supporters of TTV Dinakaran, who heads the rival AMMK.  The three were asked by Jayalalithaa to contest on the AIADMK symbol of two leaves. Thus, in effect they are AIADMK MLAs. However, they have in the past made it clear that they owe their allegiance to jailed Sasikala, former general secretary of the party. The three MLAs have been keeping the AIADMK guessing about their real intentions. While appearing to be close to Dinakaran, they also try to be in the good books of the AIADMK government.

The ruling AIADMK has made several attempts to win them over since every vote is crucial in the Tamil Nadu Legislative Assembly where the ruling party is virtually in a minority and is battling hard to keep its  head above water.  Of the three, Karunas is more vocal in his support of Dinakaran, and plays the Thevar card to perfection.

In the Thevar-dominated south Tamil Nadu, the Dinakaran group has been seen as securing support from the community for good measure, causing concern in the ruling AIADMK camp.

Karunas has cleverly projected the Mukkalathor/Thevar community card and is positioning himself as a martyr who is merely reacting to provocation from ‘the other side’.

With the disqualification case judgment expected shortly, the AIADMK government is trying to ensure the support of the three MLAs. As part of this strategy, AIADMK leaders aim at crushing the Dinakaran group. The hate speech of Karunas has come in handy for these leaders to put pressure on the MLA and force him to support the AIADMK.

The associates of Karunas, Ansari of MJK and Thaniyarasu of KIP, while disapproving of the speech by Karunas, have pointed out that police has not acted against S V Shekher and H Raja of the BJP.

DMK president M K Stalin and a few other opposition leaders too have accused the AIADMK government of partisanship here, in allowing H Raja and S V Shekhar to go scot free, while taking firm action against Karunas.

Both the DMK and the Dinakaran camps are aware that the AIADMK government is skating on thin ice while handling the Karunas issue in a firm manner. Karunas has cleverly projected the Mukkalathor/Thevar community card and is positioning himself as a martyr who is merely reacting to provocation from ‘the other side’. The Thevar lobby in the AIADMK is keen that the government does not send wrong signals to the Thevar community at a time when it is already gravitating towards Dinakaran. A consolidation of the Thevar vote in favour of the AMMK could prove disastrous for the AIADMK in at least 40 to 50 constituencies where the Thevars are a dominant group, wielding considerable influence in trade and social circles.

In the days to come, Karunas can be expected to play the Thevar card to the hilt, adding to the discomfiture of the AIADMK government. In most of the southern districts, where several parties field strong Thevar candidates, the AIADMK has to deal with the Karunas backlash.