Karunanidhi was not an atheist, says spiritualist who knew him closely for 40 years One of the best kept secrets of the world was DMK President M Karunanidhi’s relationship with saint  Amogam Swami of Chennai. Grandson of Kumbakonam Fiddle Rajamanickam Pillai, Amogam Swami is today spiritual guru for a number of celebrities. Karunanidhi was among the celebrity visitors to his house in Ashok Nagar, Chennai.

Amogam Swami said he and his family members had met Karunanidhi off and on in the seventies. It was only in 1977 that he first got the opportunity to meet him alone. For some time, when Karunanidhi was out of power, his regular drivers were hesitant to drive his car and moved away. “In those days, when Thiru Karunanidhi had to meet some persons without the knowledge of intelligence police personnel, he would travel in my Standard car and make his visits without the knowledge of the police”.

During the period from 1977 to 1983-84, he would meet Karunanidhi every Tuesday morning after visiting the Vadapalani Murugan temple and give him a vibhuti packet. “He accepted the packet though I don’t know what he would do with it”, said Amogam Swami. His family members were aware of the visit, Swami said. 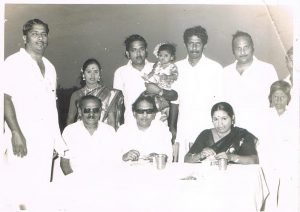 Amogam Swami (standing far left) with Karunanidhi and Rajathi and others

“He would accept the vibhuti packet though I don’t know what he did with the packet. I have not seen him using the vibhuti. Perhaps, he respected my faith and didn’t want to stop me. However, I felt that he recognized spirituality,” the saint said.

“Earlier, in 1976-end, he attended the wedding of my younger brother Dr Padmanabhan with the daughter of Anbil Dharmalingam. In 1978, Kalaignar attended the birthday function of my brother’s daughter in Chennai.

“In 1977-78, I was asked to help a Joint Registrar of Industries and Commerce with relation to a corruption case that came up in Krishnagiri court where my brother was District Judge. He [the joint director] met me and requested my help. My brother would never interfere in any case and would go strictly by merits of the case. I said my brother cannot help him but I would pray for him. What do you want, I asked him. He said he should not be jailed. I prayed for him. A few days before the judgment was to be delivered, he had a heart attack and died. I told Thiru Karunanidhi about what transpired. “I explained that the officer did not seek to be acquitted in the case. His prayer was that he should not be jailed, and that has happened. So, one should express a clear and specific prayer. He got the benefit of his prayer to avoid a jail sentence, I pointed out to Kalaignar”. “Kalaignar’s confidence in me increased after this incident. One day, Murasoli  Selvam and his lawyer came to my house in Ashok Nagar and sought relief in a famous murder case. The then chief minister, MGR, went all out to secure a conviction for the accused in the sensational case. Karunanidhi sent them to me and hoped that I could help save Veerapandi Arumugham. I prayed for the accused. When the judgment came and Arumugham was acquitted, MGR was annoyed and came to know that I had helped him in whatever way I could. Kalaignar’s confidence in me increased further”.

“MGR came to know that I help Karunanidhi and his family members. In 1981, MGR sent word through Thiru R D Seethapathy and wanted me to see him. I explained to Seethapathy that I did not meet politicians or seek any favour from them. I met Kalaignar due to my family connections,” he conveyed to MGR.

“The matter ended there. Thiru Karunanidhi was aware that I didn’t go to MGR’s house. His respect for me increased as also his confidence that I was a genuine person”, Amogam Swami said.

“In 1984, I had an opportunity to see him before the election campaign was scheduled to begin. I read details of his tour programme in a newspaper and immediately sought to meet him. I asked him not to commence the tour programme on Chandraashtamam day. I asked him to change the date. He said speak to Maran. Muraosli Maran said he respected me and that he was also aware how much Kalaignar respected me. He said he would change the date though he didn’t believe in these things. The date was changed. When the tour programme began, his car met with an accident near Salem, and he escaped unhurt. “That night Kalaignar spoke to me over the phone, and told me about the accident and said the date was changed, yet the accident happened. Why”?  “I told him that on the contrary, it was only because the date was changed that he escaped unhurt in the accident, and you are able to speak to me now”.  Karunanidhi laughed but obviously the incident made him think even more.

“Even today, I read in the newspapers that DMK working president M K Stalin would get elected at the party general council meeting on August 28. He should avoid the date as it was Chandraastamam day and also marked by ‘marana yogam’. For Stalin born in pooram nakshatram, Tuesday is not a suitable date, and not auspicious for him. “I am conveying this through you, but I  don’t know whether he will heed my advice”, Amogam Swami said.

Jayalalithaa too sent messages through representatives and “sought my advice about her future”.

Jayalalithaa too sent messages through representatives and “sought my advice about her future”.  Before the 2016 elections, she wanted to know if the AIADMK would remain in power and her prospects as CM again. “I conveyed that her party will win the elections and she would continue. She saw the interview in YouTube. I had said, ‘jayalalithaa will be cm but aanaa avanga aindhu aandu aatchiyilae iruppaangalaa, theriyaadhu’. Her party will form the government but I don’t know whether she will be there as CM for five years). She saw the interview and was happy. But she also knew what I meant as she also had a premonition that she would die sooner than later.

“To my mind, Karunanidhi was not an atheist. At the same time, he was not a follower of religious practices and was not a deeply religious person. He was somewhere in between these two stages. I think he did recognize spirituality. Every day, before leaving the house, he would observe silence in front of the portraits of his parents. He himself told me that fake saamiyaars should be avoided, and he could make out the difference between a fake and a genuine saamiyaar. Karunanidhi told me that a genuine saint would never seek personal favours. He considered me as a genuine person. I never used to see him when he was CM.”

“Amogam”, he said at the end of the interview as I I left his Ashok Nagar residence.

Forums › Karunanidhi was not an atheist, says spiritualist who knew him closely for 40 years