Let us face it. Kerala is facing its worst ever floods. The full dimensions of the crisis will unfold for a long time to come. It’s everyone’s duty to do their best to help that state in this hour of unprecedented disaster. So one of the things that would help Kerala would be if more water does not go to that state till the floods in Kerala completely recede. Tamil Nadu, Kerala’s neighbor and India’s most celebrated water deficit state, can help in this by reducing the water inflow to Kerala.

Here it should be noted that as per Central Water Commission’s National Register of Large Dams, four dams, namely Mullaiperiyar on Periyar river; Thunacadavu, Parambikulam and Peruvaripallam, all three on Chalakudi river, are located in Kerala state and are operated and maintained by Tamil Nadu PWD. So when we say TN should try to minimize water flow to Kerala, we should keep all these four dams in mind. Let us illustrate this by considering Mullaiperiyar Dam (marked as Periyar Dam in the map). 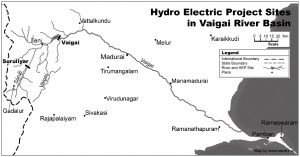 Tamil Nadu government has the power to make decisions on what to do with the water collected behind Mullaiperiyar dam. Tamil Nadu can either divert it to Vaigai Dam or it can release it through spillway gates downstream Periyar river to Kerala. Currently, the water from the Mullaiperiyar reservoir is diverted through a subterranean tunnel to Forebay Dam near Kumily (Errachipalam). From the Forebay dam, hydel pipelines carry the water to the 180 MW Hydropower station. From the Power Station, the water is let out into Vairavanar river and then to Suruliyar and Vaigai Dam.

The flood hydrographs below for Vendiperiyar site, downstream from Mullaperiyar Dam, but upstream from Idukki dam for the period from Aug 15 to Aug 19 show that outflows from Mullaperiyar Dam into Periyar River and Kerala have been so high that the Water level at Vendiperiyar has not only crossed the recorded Highest Ever Flood Level (HFL) of 793.8 m at this location, but it reached 797.3 m, which is a massive 3.5 m above the HFL. Moreover, the water level has remained above HFL now for four days and counting. It would have helped Kerala if this had been avoided. 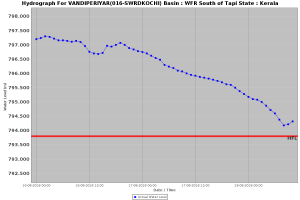 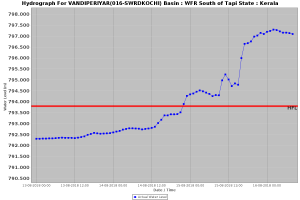 Secondly, TN should not fill up the Mullaiperiyar Dam to highest possible level allowed to it, 142 ft, at first available instance. In fact, prudent and safe dam operation also requires that water level in the dam should be kept at minimum necessary level during filling period. Incidentally, filling period in case of Periyar catchment includes not only South West Monsoon that ends in September, but also North East Monsoon that follows during Oct-Dec. The lower the water level in the dam during this inflow period, more flood cushion the dam operators would have, and lesser will be the necessity of release of high water flow and floods in Kerala Periyar basin.

As per latest updates, water level in Vaigai Dam has reached 66 ft (Full Reservoir Level 71 ft) on Friday (Aug 17) and the Chief Minister has announced release of water from Vaigai Dam to Periyar and Thirumangalam main canal on Monday (Aug 20) to irrigate over one lakh acres in Madurai, Dindigul and Sivgangai districts. This could have possibly happened earlier, so that there was scope of release of more water from Mullaperiyar to Vaigai Dam and less need for release of water to Kerala Periyar basin.

The Supreme Court of India on Friday (Aug 17, 2018) suggested that the disaster management sub-committee, the National Crisis Management Committee and the supervisory panel monitoring the Mullaperiyar dam in the flood-hit Kerala hold meetings to explore ways to reduce the water level in the Mullaperiyar reservoir.

There is also a role for Central Water Commission, which is supposed to be India’s premier technical body on water resources, the only body in charge of flood forecasting and in case of Mullaiperiyar, CWC has a special role under Supreme Court orders. Unfortunately, CWC seems to have completely failed in its role. It has no flood forecasting stations in whole of Kerala. It also seems to have failed in ensuring that water releases from Mullaiperiyar to Kerala had been minimized.

Tamil Nadu, at least from here on, can try to minimize water flow from Mullaiperiyar and other dams in its control to Kerala.

Forums › Mullaperiyar Dam: What TN can do to help Kerala